We seem to be waking earlier and earlier. Today we were ready to go and it was still dark! We waited for the sun to come up and pedalled out of a now very quiet Chickmalagur, into the hills ahead.

We were almost straight into a climb but then the road flattened out following the base of an impressive ridge. It was still early and shady and we were actually cold – a novel experience! Puncture number 3 came out of the blue – David’s back tyre again. It was quickly repaired though and David managed to get the tyre pumped up much more with the new pump so hopefully that will reduce the puncture rate (about 1 a week at the moment). 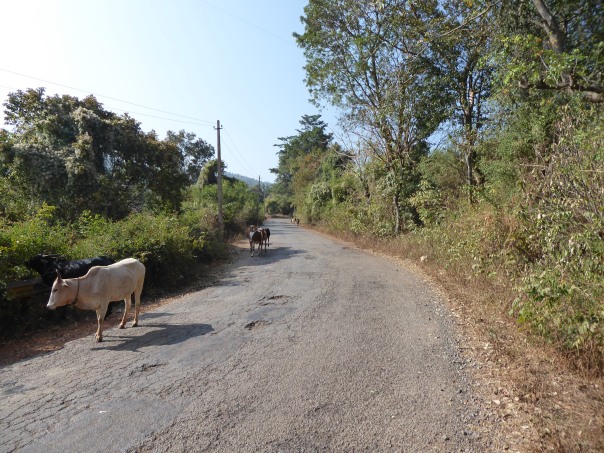 We were soon into coffee country as the road weaved its way through coffee plantations in the shadows of some much higher ridges where trekking was popular. The road was very quiet – mainly the odd truck ferrying workers and of course the ubiquitous motor bikes. It was serene and beautiful.

One more steepish climb and then we had a swooping descent down into a wide valley we could see before us. A few hairpin bends and then a long straight descent on empty, well-made road – perfect.

After going through coffee country we fancied a coffee and, at Lingadahalli ,we passed the ‘Modern Café’. To us it looked like a little roadside stall next to a slightly smelly drain but it did do a good cup of coffee in little paper cups.

Onward and still very gradually descending we hit the main road to Shimoga (our destination for the night). We were making really good time so decided to take a detour onto more minor roads towards Bhadra Wildlife Sanctuary. About 15km further on we reached the sanctuary – one of the more minor ones in terms of tourist destinations I think, as it had been hard to find much on the internet. It does have about 40 tigers in the sanctuary area which covers a large area of the hills we had cycled through.

Be that as it may, we arrived about 1pm but ‘safaris’ and treks did not start again until 4pm. That would not leave enough time to cycle on to Shimoga and the chances of tiger sightings seemed slim so we continued on. A few km further on and we reached the impressive Bhadra dam where we stopped to picnic. A group of men were intensely interested in David’s bike and his Garmin and seemed impressed that we had cycled 77km that morning (mind you so were we). They totally ignored my bike – presumably because they could not be seem looking at girly kit!

Less than 30km to go and the road took us through the corner of the sanctuary. No animals sighted in the dense bush beside the road, but we were warned that Tigers may be crossing! However, like the signs for Elk in Oregon, there were more signs than signs of the animals. The wind seems to get up in the afternoons and was blowing against us again but we covered the km reasonably easily, just stopping at a roadside eatery for a sugar laden fizzy pop.

The route into Shimoga a city of over 320,000 people was amazingly quiet. Even as we got into the city, the traffic was not too mad by the standards we have got used to. It seemed a smart, up market city compared to those we have seen so far.

We found our hotel and showered then decided that we should look for some more inner tubes, as it seemed the sort of place with a more specialist bike shop. Smaller bike shops we had stopped at did not stock the right sizes. One thing that has surprised us is the lack of bike shops. 30 years ago every street was teeming with bikes and bike shops were everywhere. Now the streets teem with motocycles and there are motorcycle shops everywhere but few bike shops.

After a couple of false starts from cycle shops we had found on google we were directed to a bigger bike shop. There we found success and got chatting to the shop owner. We met the owner who was a keen member of the Shimoga Cycle Club. He asked if we would we come to the meeting of Club that happened to be meeting tonight to talk about our trip? They will pick is up from our hotel. There was only one answer! He also had the inner tubes we needed and provided coconut juice for us to drink, from fresh coconuts. All in all, a good outcome. 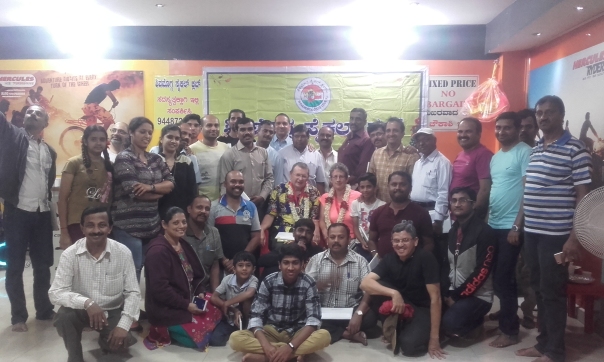 So at 9pm we were picked up from the hotel and driven to the club meeting. We were introduced to the members and we each gave a little speech about our trip so far. The club was started in 2014 and has about 150 members. A group goes out cycling every Sunday morning and there is also a small group of women cyclists.

We were given food and drink and then presented with garlands and a medal each and lots of photos were taken. It was all quite amazing. It was inspiring to see such a group of varied ages, men, women and children, who cared about cycling and wanted to expand cycling in India. We were treated with incredible kindness and it will be a highlight of our trip and a lasting memory.