Today was a day of multiple laughs. It was also the day we reached Goa, which seemed significant. Our first few km were not such a laugh, as we immediately had to tackle a steep hill, up to 14%, to climb away from Kudle beach. However, our legs were rested and fresh and it was soon over, and then we were treated to the rising sun as we crossed over the hill back over to Gokarna itself and then on along a quiet back coast road. After 13km we reached another ‘will there be a ferry across the river’ moments.   But as we drew up we could see the ferry on the other side. Soon we were loading up and the ferry filled with a gaggle of schoolgirls – some giggling, some moody, all with rucksacks slung over their backs; just like school children everywhere. Except this was a rather different commute across the palm fringed river.

Soon we were back on the road, peddling through a series of villages. We knew we had to hit the main road after about 30km and took what looked to be a road to cut off the corner. Soon the road petered out but a man by his hut waved us on saying ‘shortcut road’ – through a fence (saying no entry onto military land) and along a sandy path. So rather dubiously, and giggling as we slithered along, we followed the path and sure enough after a few hundred meters we hit the paved road again.

We were now on the main coastal highway but the traffic was fine. There were a few awkward dusty sections with lots of lorries past some quarrying but then we were peddling past a massive naval base (not that we could see anything other than fence and barbed wire) and then into the town of Karwar. There we achieved our objective of getting some money, and our more important objective of a particularly good cup of coffee!

After Karwar there was a massive road-widening project to create a large dual carriageway. The new half had been paved but had yet not opened. It was accessible so, accompanied by a few motorbikes, we had the whole carriageway to ourselves for long stretches and were larking about taking ‘in flight’ photos of each other cycling along. 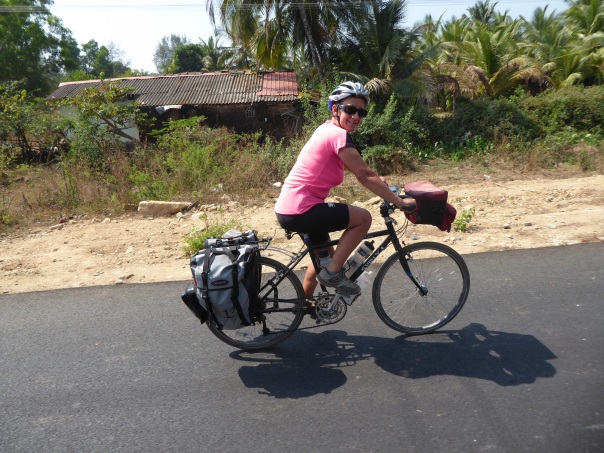 Then we crossed the border from Karnataka into Goa and almost instantly felt we were in a different ecosystem – much more tropical again. The road was smooth and things felt more prosperous. Goa is a tiny state that was only relinquished by the Portuguese in 1961, long after independence and only after the Indian army eventually walked in to unite the last section of the subcontinent. 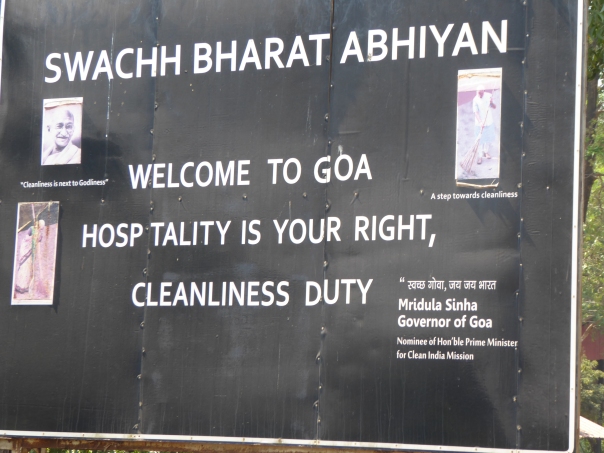 The main road did an enormous loop but it looked as if there was a side road we could take with another ‘will there be a ferry across the river moment’. No ferry this time but there was a narrow rusty bridge, not even wide enough to allow motorbikes and somewhat of a squeeze with a bike with panniers, but it looked sturdy enough and we laughed our way across.

We were soon at another ‘river moment’. The road looked as if it looped round but we thought we would check out the jetty that was signposted down a little side road. At the jetty it was a very short hop across to a sandy bar. “Do you want boat” a man called, “how much?” “200 rupees”. Our ferry this morning had cost 10 rupees so we laughed and set off to cycle round. “No, no, bridge is closed for painting” we were told “150 rupees”. Now the bridge may or may not have been closed, and I suspect the latter, but what the hell. So we agreed to the “boat”. We were led away from the large boat to a narrow canoe. They duly loaded on the 2 bikes, 6 panniers and us then said they could take us a bit further to get to a road as we would find it difficult on the sand. We admitted defeat and agreed to the 200 (it’s only £2.50 after all and worth it just for the laugh). Sitting somewhat rigidly to stop the canoe tipping from side to side it set off across the estuary. Half way across the boatman tried to renegotiate the price again but we duly ignored this and were laughing too much at the madness of all our stuff in this canoe. In spite of our refusal to pay more, we were safely delivered to the other side!

It was then just a few km to Palolem beach – yet another “most beautiful beach in India” (again!). It was very picturesque but much busier and more developed than Kudle beach but we happily sat in a beachside café for a drink and a late pasta lunch.

Then just a few kms on the next bay Agonda beach, our destination for the day. Under 100km felt like an easy relaxed and enjoyable day. We were a little nervous about the ‘budget room’ we had booked after our experience at Kudle, but although simple and set slightly away from the beach on the other side of the road, the room was great, nice balcony area and only 1 minute walk to the beach rather than right on the beach. Better for us really as safer for the bikes and quieter. Boiling hot water in the shower gave it top marks!

Agonda beach is a 2km stretch of sand. Although the bay is fringed all along by restaurants and lodgings these were fairly unobtrusive and most development happens behind the beach so not blighted by concrete or high rise. We ended the day bobbing in the waves – a far more enjoyable way to ease the legs than stretching (which we are always very bad at doing). A romantic walk along the beach with another beautiful sunset then ‘beer o’clock’ as the light finally faded. A great, happy day. 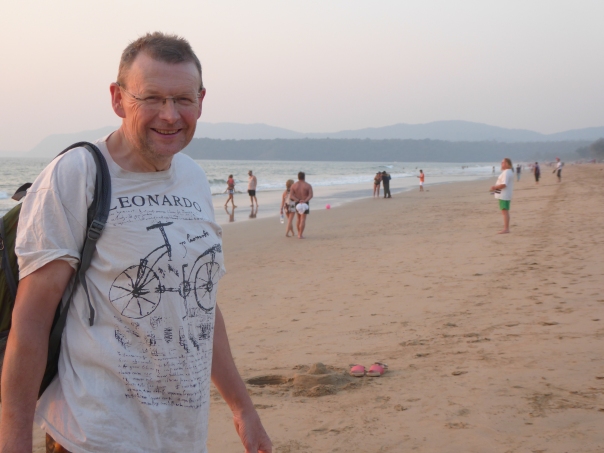