Today got off to a slightly delayed start but – so what! We agreed to have breakfast at 7.30am so we could get a reasonably early start. There was no movement at 7.35am, so I went to find our host. He seemed startled at being disturbed, looked at his watch and said “15 minutes”. Knowing that would be at least half an hour I said “But we agreed breakfast at 7.30”. “5 minutes, 5 minutes …” was the surprised response. 15 minutes later we got omelettes (rather good) and toast. We were on our way by about 8.15 or so – with a good tip for the team (despite the slightly peculiar nature of the stay).

The cycling was a repeat of yesterday with 2 changes. It was broadly the same scenery – fields and desert – and the same mixture of good and bad road surfaces. The first difference was that it was only 85km today and not 125km. Ludicrously, that felt like a “short” day now. 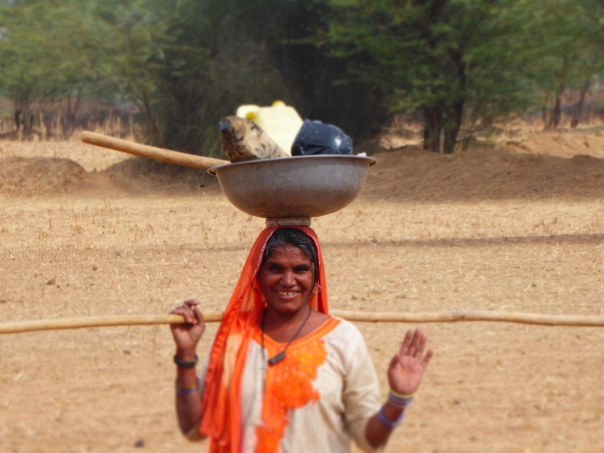 Secondly, there was 50km uphill. When I say “uphill”, that is a bit of an exaggeration – the road was an upward slope for more or less 50km. But it only went up 250m and thus was going up about 5m per km.   It was like cycling on a very flat plain which had been ever so slightly tilted so that it rose at a more or less constant rate.

We passed a few desert towns with nothing particular to recommend them except sand on the main street which brought our bicycles to a grinding halt and the usual range of shops, stalls and cattle. Between the towns the road surfaces were mostly reasonable, but occasionally it was more sand – but of the harder variety. We saw a few more camels, lots of young men on motorbikes and lots of women driving cattle or walking back from collecting firewood with the day’s collection on their heads.

There was also a high quotient of “selfie-seekers” today – all young men. One young man on a motorbike was quite offended when we said no, we would not loose all momentum by stopping cycling so he and his friends could have selfies with someone he did not know and would never meet again. We are such kill-joys but we can just continue peddling. If they catch us when we are stationary, the line of least resistance is to say yes, but stopping when we are underway is a different matter.

Rajasthan seems from our brief acquaintance to be a place where female emancipation has some way to go. The way that some young men leered at Bernie as they passed on their motorbikes was fairly transparent and did not reflect well on them (despite the fact Bernie is senior enough to be their mother or possibly even their grandmother).   Seeing a woman’s legs in public is pretty unusual here and I suppose the reaction is understandable even if I felt like knocking some of them off their bikes for the cheek of it.

Having said that, this was very much a minority reaction. The vast majority of people we meet are friendly, wave and say nice things.   But roles seem pretty rigid here, with 95% of people on bikes or in cars are men and not a single man collecting firewood. On the plus side, judging by the evidence of school uniforms, school attendance seems to be by both boys and girls, well into the teens. So girls are being educated. What happens next is not something we have enough information to comment on.

Pushkar has a reputation as a “holy place” for Hindus and as a magnet for backpackers – a slightly unusual combination; but the backpackers originally came in part for spiritual enlightenment so it is not that surprising. It is centred around a lake, nestling at the foot of a mountain. The setting is superb and invests the air with the feelings of mysticism. It is the place where Mahatma Ghandi’s ashes were scattered here. One of the things we have noticed is the extent to which Ghandi is still the moral father of the nation. His sayings are on posters in railway waiting rooms and restaurants, reminding modern Indians of the values that drove the creation of the nation. Hence choosing Puskhar as the final resting place for Ghandi’s ashes gives this little town a huge national significance.

We watched as Hindu pilgrims bathed in the water, much in the same way as adherents to religions all over the world are cleansed by the wonderful properties of H2O. “Holy water” is a timeless concept that stretches from Catholicism through to Hinduism and with a great number of religions between.

Today, away for the lake, it is a maze of shops selling the type of clothes that no self-respecting Indian would be seen dead in but are popular with the backpackers as “Indian” style clothes.   There are cafés here and loads of young westerners, exploring their inner selves.

After we arrived we went looking for a snack and ended up a falafel wrap stall – delicious but not something we have seen in any other part of Rajasthan. There were a group of delightful young people in their 20s – and we felt a bit “old” in their company. We chatted and eventually disclosed what we were doing, and they were stunned; totally stunned. They could not believe anyone as old as us was doing anything as crazy as we were doing (and had done). I felt a bit bashful at their response, assuring them that we were not super-fitness-freaks and that most of the roads we went on were quiet and well off the beaten track. Nonetheless, part of me was quietly satisfied at dispelling some of their assumptions about what folk can do when they reach the other side of the great 5-0. I did not dare tell them that one of my best mates – who is the other side of the great 7-0 – was on a 2 month mountain bike tour of New Zealand. There are some things that 20 year olds may simply disbelieve. Chapeau Malcolm – love the blog posts. 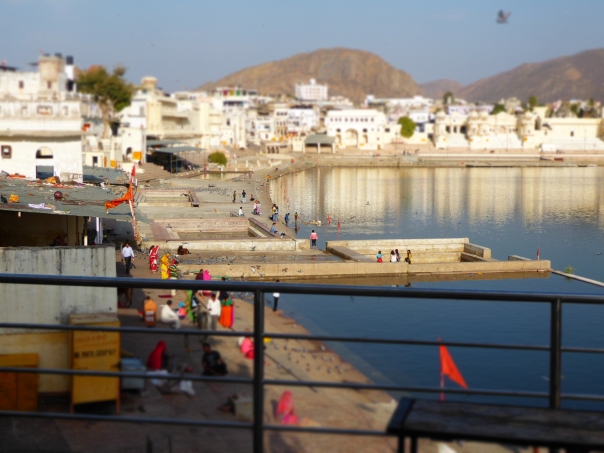 Then back to the quaint hotel for some R & R – reading, writing (making progress with the book chapter) and a rather indifferent “tourist grade” meal. Pushkar gets the thumbs up as a peaceful, spiritual place despite al the tourist trappings.