For a day where nothing much happened it was immensely enjoyable. We did our longest day, but at less than 200m climbing it was no where near our most difficult day and we got into the meditative rhythm of ‘flat’ cycling.

We woke early and were off by 7.30 am, once we had woken someone up to pay them for our room! As always we love the early morning. The clouds were gone and we experienced the sunrise in the desert –beautiful glancing milky light. Being the desert though it was a chilly 7 degrees and we had jumpers on until the sun was high and starting to warm the landscape. 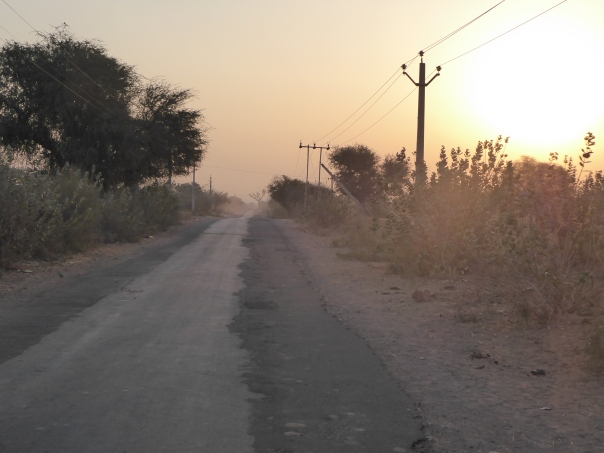 We could have taken a main road from Jodhpur to Ajmer (our destination in a couple of days time) but our decision to head north to Osian and then go east ‘cross country’ turned out to be a good one. Our first 55km to Soila was on a near empty but on a largly well paved road, passing scattered homesteads and farms where there was irrigation. Most of the houses were brick but with round mud and thatched storehouses, presumably the traditional build until brick came in. We powered along and reached Soila, a little town at a junction of several roads, for elevensies.

Freshly cooked samosas and another puffy, veggy, deep fried pastry that we don’t know the name of were delicious and great for hungry cyclists (we’ve never eaten so much deep fried food in our lives and will have to wean ourselves off when we get home).

We crossed the large north-south main road to continue east on an even smaller road. The main road seemed to be a line between the Thar desert proper and a greener more irrigated section. The road wound its way along and we certainly felt off the beaten track. The reaction passing through little villages suggested touring cyclists were not a day to day sight. As elsewhere people came up when we paused but were polite, keeping a respectful distance. The sum total of most of the English was ‘what country?’ but others with a little more English helped us with directions. They were often fascinated with the bikes and the Garmin GPS. They always clustered around David’s bike and ignored mine. Perhaps they were unsure of the etiquette and the way to respond to an odd looking female cyclist in Lycra shorts!

Cattle and goats galore were the order of the day with a couple of sightings of ‘real’ camels (ie not those at tourist spots dressed up for camel rides). The cows we have passed on he roads up to now have been extremely docile and haven’t reacted at all when we pass but Rajasthani cows were distinctly more skittish when the bikes came up behind them. On a couple of occasions we set off a mini stampede. No one seemed to mind and it only became alarming when a large bull took fright and charged around in the road. Keeping still seemed the best option until he veered off to the side!

The sun felt strong but the temperature was only around 27 at maximum so fine and after 3pm all the bite in the sun had gone and it was very pleasant.

We had gone on a slightly longer route to keep to ‘numbered’ roads as we thought these would have a better surface and at least be paved. Our last section cut down from a ‘numbered’ road to the village where we had booked a hotel – this part of the desert was also a desert in terms of hotels and the this one, at 125km, was the next one we had found. When David said ‘the Garmin shows this road comes to an end in a couple of km’ we wondered what would happen (Googlemaps showed a route through). The answer was we were soon on a dirt road bumping along the track. Luckily that only lasted a few km until it became paved again – presumably someone in that local village had upset someone important, and their section of road remained unpaved!

We came to the village of Ganthiya. We had wondered what this ‘Heritage Resort Hotel’ was doing in the middle of nowhere. When we reached the village it was no clearer as the village did not seem any bigger or different to the others we had seen. There were no signs to a hotel and the road was narrow and bumpy. I started to panic that this was another occasion where the hotel did not actually exist where booking.com placed it but sure enough we spotted it down a dusty track exactly where it should be. No signs though and the gates at the end forbiddingly shut. Was it in fact defunct? We gingerly opened the gates and there was a rather grand house with a group of men who were clearly expecting us. Thank goodness! It is one of the more odd places we have stayed! We are the only ones here and the guest book shows that the last guests were several weeks ago in January. There were probably

enough ‘helpers’ to carry in one pannier each! However once we had got clean towels and they had worked out how to turn on the water to our room so that the shower worked things were looking up.

No one’s English is good enough to explain what this place is doing here or what happens in the weeks when there are no guests. Unfortunately, our Rajasthani is non-existent so I suspect we will never know!

However the fact that we were the only guests did not prevent the lads cooking up a superb evening meal for us.  There were copious quantities – which may just have been designed to ensure we left more than enough for their meal as well.