David was still feeling under the weather so we had a quiet restful morning. Breakfast was good, we were upgraded to a much nicer room and the morning cloud gradually burnt away so that improved our mood.

The machinations of booking a safari in Ranthambhore Tiger reserve, about 10km from the town, were immensely complicated when we had tried to book something in advance. The safaris can be done in a ‘Gypsy’ jeep, that seats 6, or a ‘Cantor’ that seats 20. We had been told that all the jeep safaris were fully booked (only official government vehicles are allowed into the reserve and the numbers are strictly regulated) but we coughed up money to our hotel the evening before and we were assured we had a trip booked in a Gypsy and we would be picked up between 2-2.30pm. At just after 2.30 our jeep turned up with guide and driver, which we shared with 4 German people.

The Tiger reserve is divided into 10 zones. The drivers are allocated a zone randomly each day, so when you book you do not know what zone you will be in. Zones 1-6 are meant to be best for Tiger spotting. We were allocated zone 7. 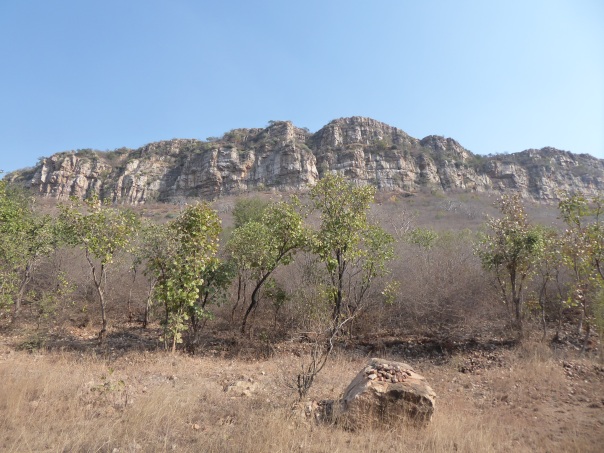 We drove the 10km to the entry to our zone and were soon bumping along sandy tracks. 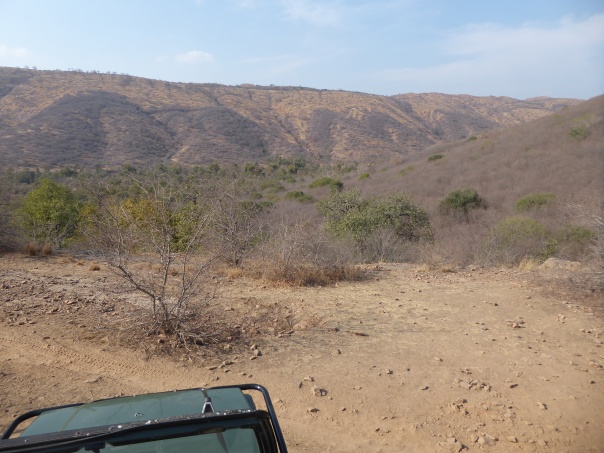 We were then taken on a real white knuckle roller coaster ride up and down a ridge. No Cantors here – how the jeep got up and down what seemed like near vertical tracks to me was incredible. We were hanging on for dear life! 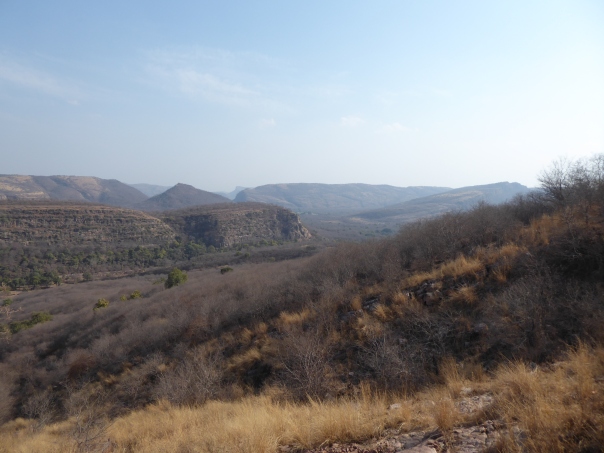 The scenery was spectacular but little sign of any animal life. Our guide told us there were few animals in Zone 7 but it was one of only 2 zones that was not flat. We saw several large Samber deer and a few small antelope in the distance but that looked like it would be the sum total of wildlife for the day. 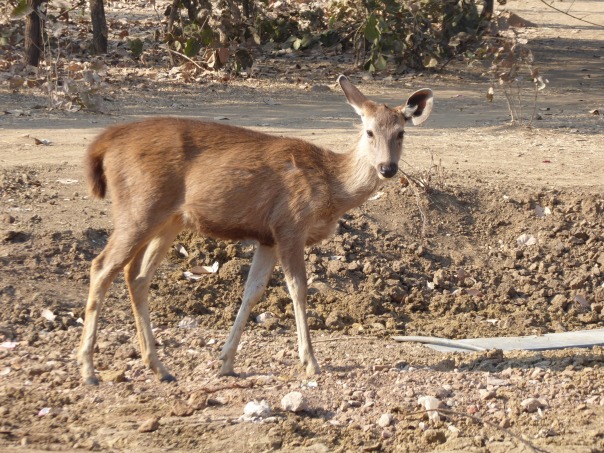 Earlier we had passed some tiger footprints alongside the track. We were told they had not been there that morning but we were sceptical to say the least.

Towards the end of the safari as the sun was going down we stopped for about half an hour at a waterhole and at least saw some varied bird life coming to drink. 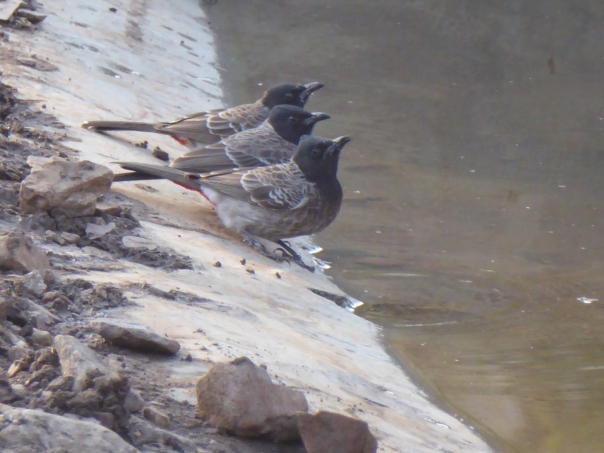 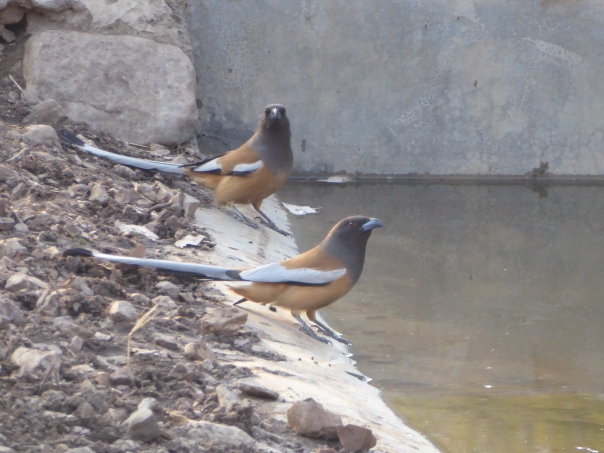 ‘Tiger is coming’ our guide said, but we were still sceptical. Several more jeeps turned up and everyone was hanging around. After the sun dipped behind the hills some of the jeeps gave up and headed off. ‘Tiger is coming’ said our guide.

Suddenly there was a whoop from another jeep. Within a few seconds our driver had done the most incredible 180 degree turn which almost tossed us out of the jeep and careered into the bushes…and there, sitting under a tree as calm as you like, was the most beautiful, magnificent large tiger just about 10m away from us. We were staggered. 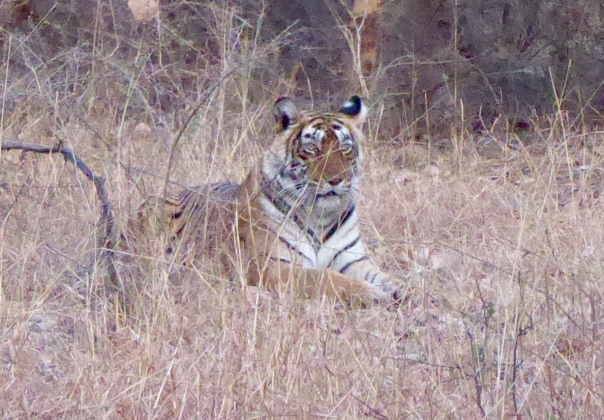 All the other jeeps piled in and he just stood up and strolled away. We saw him for perhaps just 10-20 seconds but an image that will be forever imprinted in the memory – and David had the where-with-all to take a fantastic photograph. The 3 and a half hour safari was worth it just for those few seconds (and we really enjoyed the rest of it too). 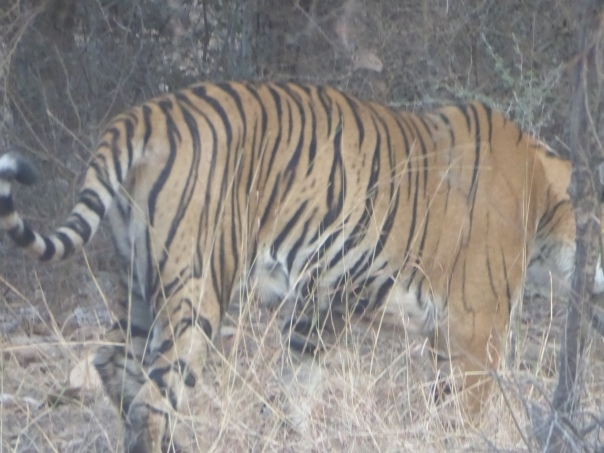 Our guide and driver were ecstatic! “So lucky, so lucky” they kept saying. The driver then put his foot down and took the track out of the park at incredible speed. We weren’t sure what the frantic hurry was, but our guide was on the phone clearly relaying the news to someone. The pace picked up even more for the 10km back to town. All the jeeps from all the zones were heading back as darkness came and they seemed determined to overtake them all, shouting out their success! We were all smiling and laughing. The chances of actually seeing a tiger seemed so small but it was definitely our lucky day.