This will be a short blog posting as not a great deal of interest to anyone else happened on our trip today! Well, apart from cycling 114km which is the longest we have cycled so far, and shows we might just be regaining some lost fitness.

We woke at 6 and were on the road before 7 (again a first for this trip). The morning air is cool, the light is low and the air is fresh. It means that early morning is a lovely time of the day to cycle. We were soon out of the town and ambling along tiny paved roads through small villages. The soil is a deep red colour here and it seems to be a really productive agricultural area. The buildings indicated people were not poor – but not well off either.

The roads got a bit more bumpy as we went East. Thailand has a north-south industrial corridor which starts 50 miles to the west of us (or so it seems). But this part is rural Thailand and the roads are of poor quality – which seems to be a pattern all over the world. Eventually the potholes gave way to hard earth with no tarmac at all. We ploughed on – though maybe using the word “plough” to describe cycling on dirt roads may not be the best choice going – but it was pretty tough. Our average speed dropped from about 20kph to about 12kph, as we navigated the road ahead of us. 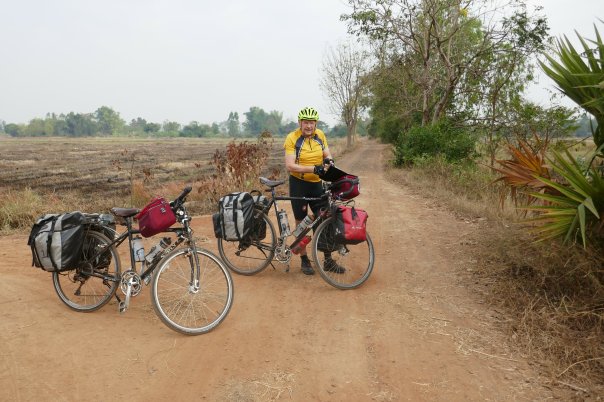 At least it was flat .. and then there was a significant hill to climb on the dirt roads. This part of the country is not short of quiet paved roads. In fact there are plenty of them. The problem is that, apart from the No24 (quasi-motorway), they all go north to south and we were going west to east! So we bailed out and headed for No24. Just before we got there we stopped for a brilliant lunch with an effeminate Thai man who conjured up the most marvellous fish soup plus an omelette – a combination that worked in the heat and humidity. 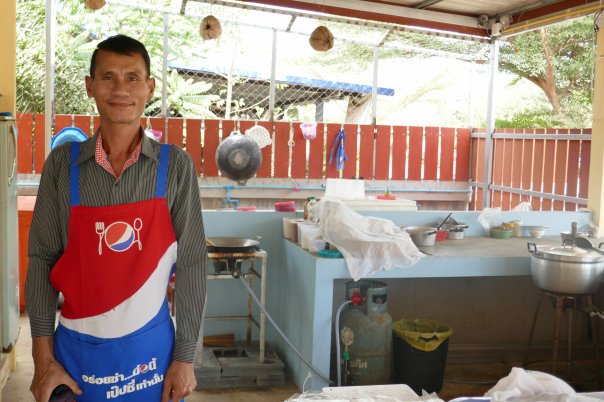 Then it was 37km on the hard shoulder of a busy dual-carriageway. The less said about that the better – save that it was far better than the No2 motorway we had struggled with a few days before.
At about 4pm, after covering 144km, we rolled into Ban Nang Rong. “Ban” seems to mean town so it was Nang Rong town – and a mighty fine town it was. This is the stopping off place before visiting the famous Khymer ruined temples of Phanom Rung, so we have that delight tomorrow.