Today was a case of “getting the miles done”. It was flat but long – with a constant headwind and with the road surface being appalling for large parts of the last 70km. At one stage I remarked to Bernie that there must be an easier weight loss plan we could have followed and we both almost fell off our bikes laughing – not a great idea when there were large trucks on the road. 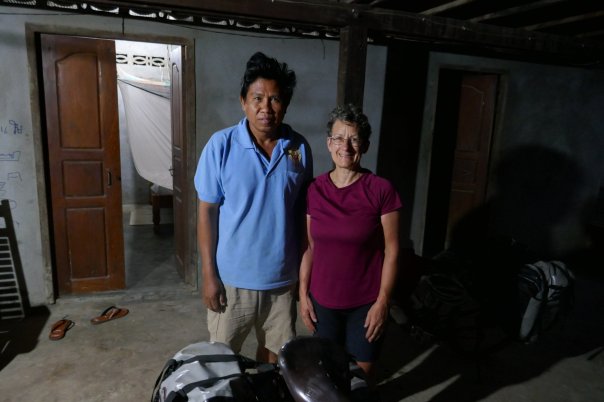 Anyway the day started early – earlier than we intended thanks to the “helpful” music coming from the Buddist Temple which was about 100 yards from our homestay. It belted out repeated rhythms from about 5am, making our 5.30 alarm call wholly pointless. We got up, did the last of our packing and said our goodbyes to our generous hosts.

Then, just as it was getting light, we left at 6.12am. We started by cycling on the left hand side of the road – as per Thailand and the UK – and soon realised our error when we almost crashed with a motorbike who was mega confused – our fault entirely. The air was light and calm, the morning rush hour to the fields was underway and we only stopped to take photos of the rising sun.

The next 60km were glorious – good surfaces, quiet roads and virtually no wind. We also went very, very gently downhill for 50km, starting at 90m height and ending at 15m. There were loads of people about in the small towns we passed and workers off to the fields. As we descended, the amount of water increased and paddy fields began to appear. We also noted that the ambiance took on a greater feeling of prosperity. Cambodia’s GDP has been steadily growing by between 6% and 8% per year for the past 10 years – an impressive but sustainable level of growth. 40% of the Cambodian population is aged 16 or below, so the economy needs to create lots of jobs just to meet the needs of those coming onto the labour market each year. This means there are schools and lots of young people everywhere. There are also a number of older citizens but a distinct lack of people in their 40s and 50s – due to the Pol Pot regime and the Killing Fields. So it is a country with a history of recent tragedy, but with a growing population and economy, and an obvious enthusiasm for the future.

At about 10am we reached the major town of Sisophon, where we would turn East to get to Siem Riep (with the Ankor Wat temples) or go south on the road to Battambang. We knew the Battambang road would be busy, because it was one route to get to Phnom Penh but had no factored in that the whole route was in the (slow) process of being upgraded to a 2 lane motorway, but still being used as a main road. This meant the usable surface was smaller than usual, in pretty bad condition and there was a huge amount of dust from the new carriageways being laid out at the side. This is all Chinese money – part of the silk road development process – that will tie the government of Cambodia into China for the foreseeable future. The same thing is happening across Asia and Africa, Mr Trump may have his “America First” policy but China has a far more effective approach by investing in (and then owning) infrastructure for developing countries in many parts of the the world and creating long term economic ties as a consequence. China has invested more than $2billion in Cambodia in recent years, which buys a lot of new roads in this part of the world!

The short term consequence of Chinese investment was a horrid 70km for us, but we rolled into Battdambang at about 3pm, and collapsed after a welcome shower. Then we strolled around this French colonial town for the early evening, ate and discussed life, the universe and everything. The market was colourful and had a feeling of activity that drew in locals and visitors alike – but we did not partake of the live eels that were being killed on demand – but they must have been very fresh (if fresh eels are your thing).

It seems a long way away from the Brexit vote in Parliament, but the only clear thing is that Brexit-inspired chaos looks certain to continue. However, we feel well out of it here (knowing full well nothing will be any clearer when we get back at the end of February.