Today was a lovely cycle along the river Mekong, with villages all the way, plenty of interest and timely food stops. The temperature was not too bad, the road surfaces were good and we had a following wind. Nothing is perfect but this was pretty good. 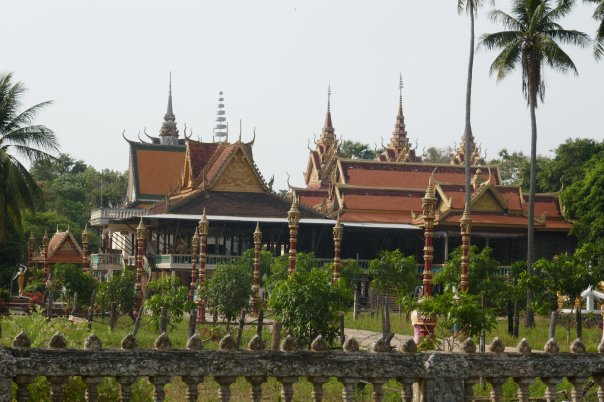 We woke with the alarm at 5.15am and were on the road by 6.30am – slightly delayed by pumping up tyres and having coffee. We were conscious that our bikes were beginning to look rather shabby after all the dust we had but, heh hoh, this was not a beauty contest. Our thoughts were dominated by my brother’s illness but he wants us to keep travelling and keep sending him updates, photos and travelling tales as they mean so much to him. So Pete, if you are reading this, we are doing so!

The road meandered around the East bank of the Mekong, sometimes next to the river and sometimes a few km away in paddy fields which were fed by river water. The road was quiet and we were overtaken by a range of vehicles – including a bullock cart with 2 huge bullocks on board, pulled by a motorbike. However the prize of the day goes to the motorbike with ice-cream side car which had a horn that was adapted to play “My heart will go on” from the movie, Titanic, at a very slow pace as if it were a funeral march. It took a long time to work out what the tune was but, of course, once it got into our heads it stayed there for much of the day! I will never hear that song again without thinking of the ice-cream salesman on the Mekong River highway.

We turned off the main road to follow the river. The side road was usually one field away from the water, and was continually populated with houses for almost all of the next 40km. The houses are mostly on stilts – to protect against the flooding when the river rises in the wet season. Lucky told us yesterday that there were bad floods this year and hundreds of people had died. The Mekong in flood must be terrifying. The river has a mixed status – being both the great benefactor for this region and the cause of so many deaths.

This is “Cham” territory, with a number of Cham villages. These are ethic Khymers who are mostly Muslim. There was an increase in mosques, veiled women (but very few fully covered) and men with Islamic head coverings. We stopped at a Muslim eatery for lunch and the local Imam helped us get some excellent Chicken and rice, as well as topping up our water bottles. All very friendly and – of course – our meal cost $1. Everything seems to add up to $1 – vegetables, multiple soft drinks or even a beer. It is always mysteriously $1. Whilst I am confident we are charged more than the locals, I do not resent an informal tourist surcharge. It is a way of delivering value directly into the local economy and seems to be fairly well established. We are rarely charged any more than $1, and even with the tourist surcharge, things are far more affordable for us than for the locals given their incomes. So we smile, treat the price asked as fair and pay up.

We took lunch having covered 85km – not a bad morning. But we both felt slightly heavy legged and so stopped for a soft drink at about 103km. This produced one of the major amusements of the trip. The soft drink seller we stopped at had no cold drinks, but directed us to a store opposite who did. The couple who ran the store doubled up by cleaning motor bikes – with a water spray until and cleaning cloths. So we tentatively asked about this service for our bikes and – surprise, surprise – it cost $1.

Fantastic value as we watched them expertly clean every part of the bikes, getting the mud, dirt and grime out of all the crevices. But they thought it was hilarious that anyone thought a bicycle was worth cleaning. This gathered quite a crowd including a lady of about our age who was fascinated by the whole process; no translation needed to understand that she wanted to know where had we come from, where were we going and when did we not have sore bums. The last question involved her feeling Bernie’s padded trousers and then carefully feeling my posterior as well – to the further huge amusement of the onlookers. She was quite a character and we were happy to play along. The sub-text was “Well they are mad of course – not only having their bikes cleaned but also cycling all this way – you think they could afford a motorbike but poor things have to cycle”. 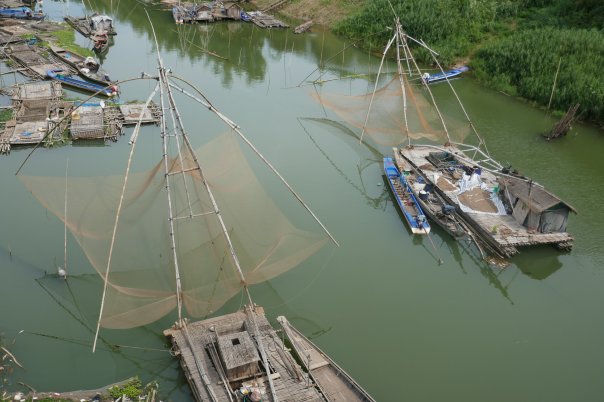 This really cheered us up and we ambled along the last 23km, finally crossing over the river into the city of Kampong Cham at about 3pm. There was not a single hill all day and the only time we registered any height gain was to climb the few metres needed to a bridge. I have never done such a sustained flat ride with the wind behind me. Such a change from Northern Cambodia where we battled against the wind day after day. So a lovely day on the bikes – just 1 more day to reach the capital.