Although I am sure the monks were praying early it mercifully was not broadcast across loud speaker as with some other temples so we woke gently in our temple camp site. As I stirred outside the tent for an early morning brew at dawn, so the monks were also stoking the fire in their kitchen area and preparing breakfast. We slowly broke camp and headed off (having persuaded the monks to accept a donation) to meet our guide for our kayaking trip (booked through Cambodia Discovery Trail). This part of the Mekong is famous for a pod of rare Irrawaddy fresh water dolphins and we were hopeful of spotting them.

First they strapped our bikes and panniers onto a motorbike trailer to transport them to the finishing point so that we could continue cycling from there. Everything can be carried on a motorbike in some sort of trailer or other. The most impressive so far was a very large wooden bed!

Our guide, Lucky Kip, was a pleasant softly spoken local man whose family were fishermen and knew this bit of the river like the back of his hand. We were in a tandem kayak while he had his own single. We were soon installed and pushing off onto the mighty river. Anything else aside it was incredible kayaking across to the other side first and then drifting downstream on the swirling currents. As it is dry season the river is scattered with trees and bushes and small islands poking out of the water. During the wet season the river rises by 35m and all these are submerged. It was both peaceful and but quite scary with the power of the river. We saw cormorants and king fishers then pulled up onto a small island and swam in a small protected bay. 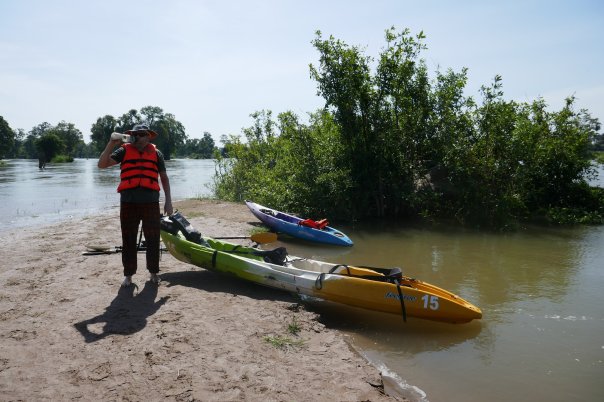 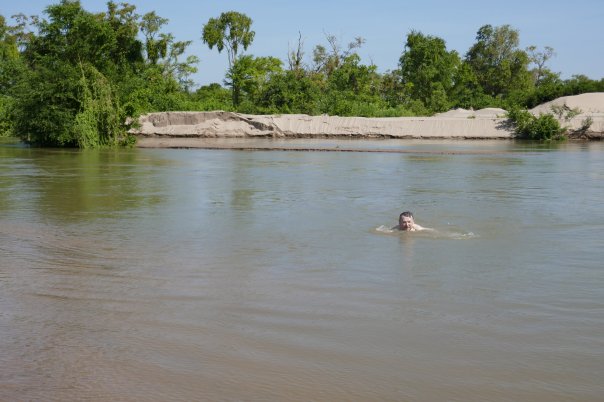 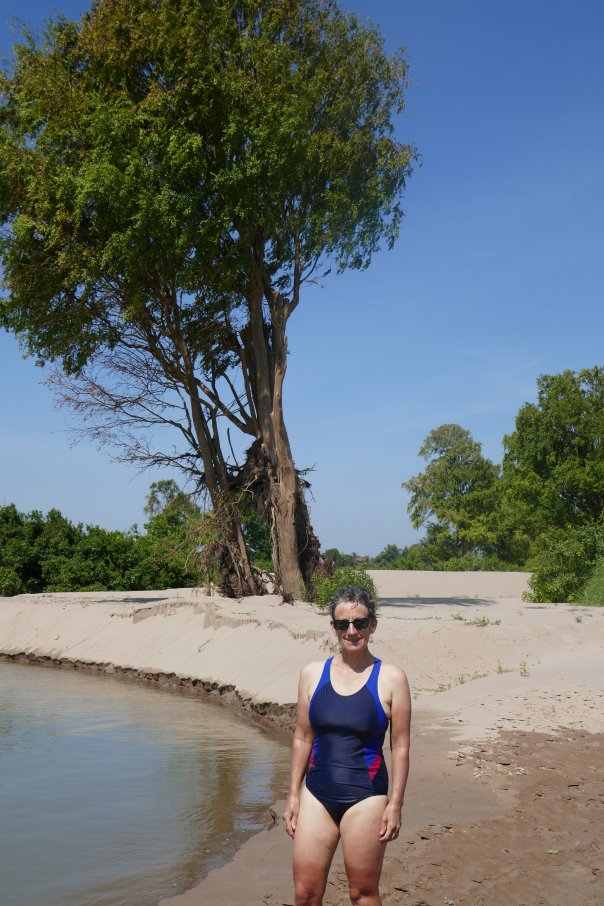 We then paddled through an area called the floating forest – large trees looming out of the water with elaborate root systems. 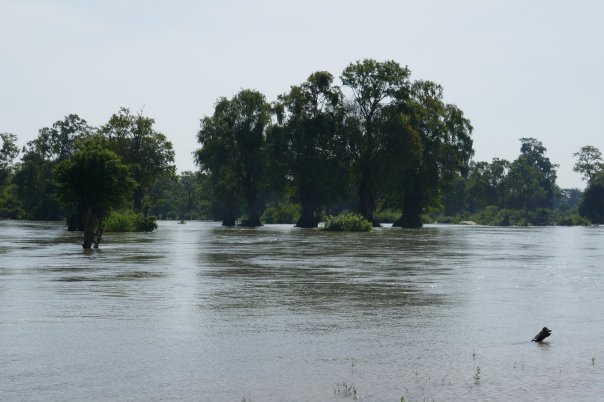 We were then on open water and into the dolphin area. We were making our way to the opposite bank when lucky suddenly stopped and paddled rapidly to the other bank with us following as fast as we could. We pulled the boats onto the bank and soon saw a couple of the dolphins coming up for air then diving down again. These dolphins are shy and easily scared off but we watched for 20 minutes or so as they rose up and down. Glimpses only each time but as there are only 80-90 left in the whole Mekong river it was a privilege to see them. The fresh water dolphins have flatter noses and larger rounder heads compared to the ocean dolphins. There were around 2000 on the river but during the starvation of the Pol Pot years the local people killed them to eat and for oil – often shooting them or dynamiting them out of the water. In spite of concerted conservation efforts their numbers are still precarious but thought to have raised to around 90 last year because of good rains. With females only giving birth every 3 years if there is a year of a lot of pollution it makes a significant difference.

While we were watching the dolphins we were also watching fishermen on small boats casting their nets and pulling them in, catching small fish. 1 kilo is 5000 rials (about 1 pound) – that’s a lot of fishing for not much money. 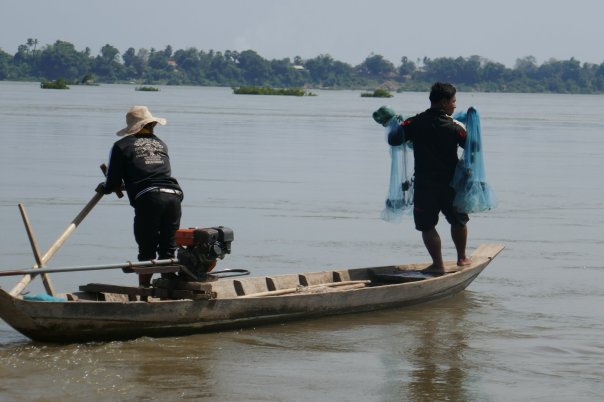 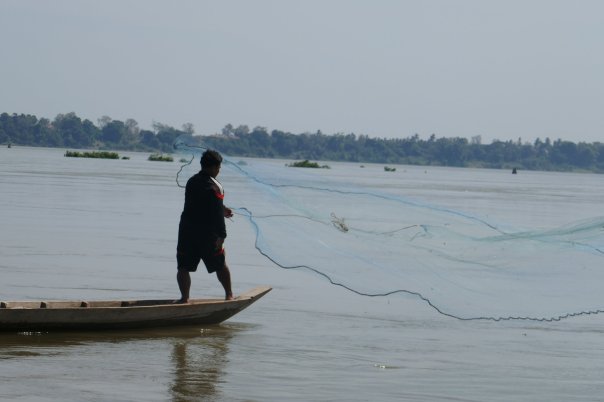 We then had a final hard pull directly across the river to the other bank to finish our trip. Out bikes were there waiting for us and we had just 15km along a small paved but bumpy road into the town of Kratie. We treated ourselves to a room with A/C and felt exhausted. We thought we were fit but suddenly using totally different muscles and we were wiped out again!

Kratie felt a step different from the more remote north east. More affluent, more touristy (lots of places with burgers on the menu), nearer to Pnomh Penh. It had a long and pleasant river front but to us not nearly as charming as the little villages we had seen (or are we getting ‘tourist snobby’ again). A good place to rest and do some onward planning.