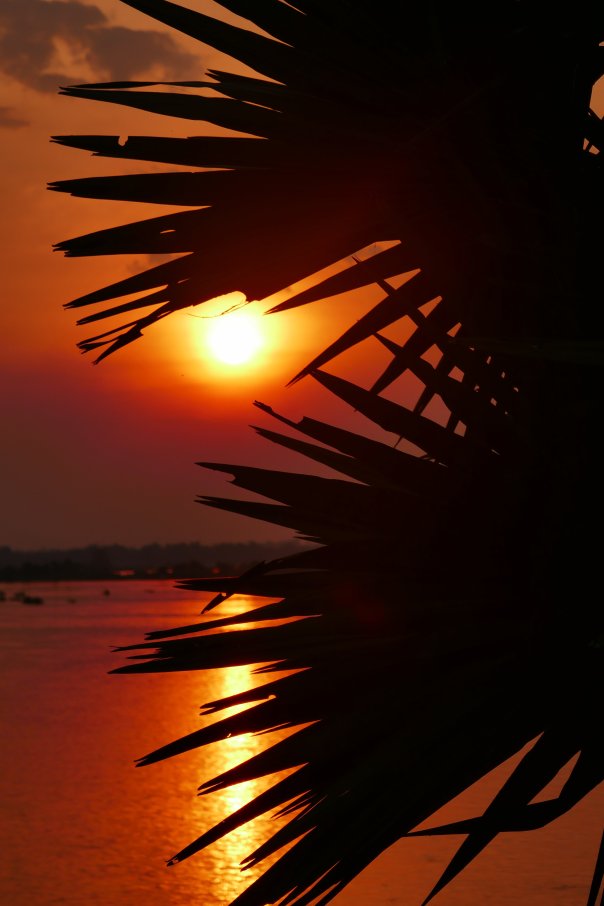 One of the features of affluent, western life is the distance between individuals. We sleep in our own rooms (possibly with a partner) with thick walls between us and other members of the family. This is pretty uncommon for the rest of the world where families live on top of each other, sleep within the same area and live in far closer contact with others. 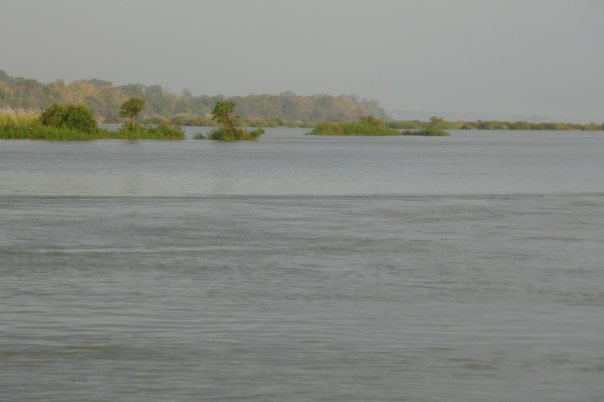 We picked our way across the island in the early morning light. The road was loose stones and so it was hard to keep balance with any weight on the front wheel, but I managed not to fall off (just). Then, as we got to the tiny ferry we saw it had just left! But, not wishing to loose the prospect of another paying customer (and with the chance of doubling the number of passengers for this trip), it did a loop and came back to the bank to pick us up – a result that saved us a hour’s wait! So we sat as the ferry chugged across the river to the mainland.

We retraced our steps along the road going north to the temple, and then left the dirt to turn East onto a sealed road. The joy of tarmac after bumping along the dirt roads is a simple pleasure. That road took us up and over a 100m hill to join the “no7” road which was one of the main routes from Cambodia to Laos. But it was quiet! There were a few trucks but not many. Lots of minibuses use this route – stopping to pick up passengers as a substitute for buses. They were held together with string – literally – as many had parts such as exhausts kept in place by string or rope, and had motorbikes strung with rope off the back. It was not clear whether the motorbike was being transported for a passenger or was a back-up to be used to go to get help when the minibus broke down. 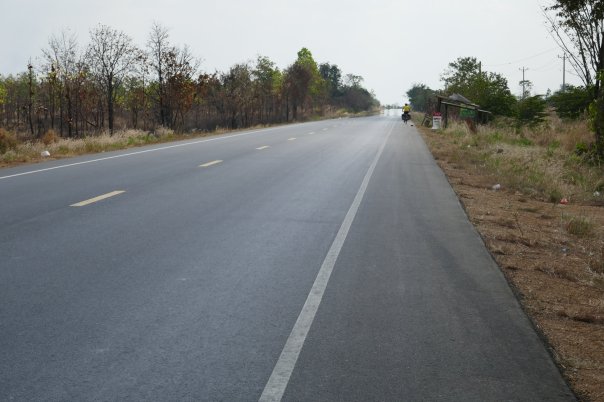 The road surface was initially not great and it ambled up and down for the next 20km, as the temperature gradually climbed. This is scrubland and was thinly populated – and only then along the road. I am pretty confident there is mostly uncultivated bush for miles and miles away from the road. But then the surface dramatically improved. The Chinese have built a brand new road in the last few years and we whizzed along. As the day heated up, so the wind got up but it was in our favour. So we sped along at about 22kph. The road undulated but there were no big hills and we made great progress. We got to the village where we originally planned to camp at about 11. So we changed plans, had a quick soft drink and carried on. The scrubland continued and, as if from nowhere, we met a cyclist coming the other way. 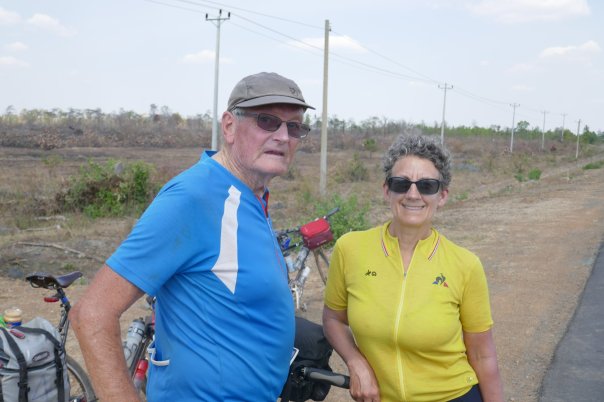 Paul is retired, lives in South Yorkshire and cycles the world when he can. We exchanged pleasantries and went our separate ways – with our southward journey being fuelled by peanut butt sandwiches. Almost as much a delight as the Chinese road.

By about 3pm we had got to the turning to bring us back to the Mekong. 14km later (and countless wave and “hello – what is your name – goodbye” from passing children) and having covered 122km, we re-joined the river at the village of Sandan. We found a small Buddhist temple and easily got permission to camp in the grounds. There were plenty of monks around but our efforts to make a contribution to the monastery were rebuffed. 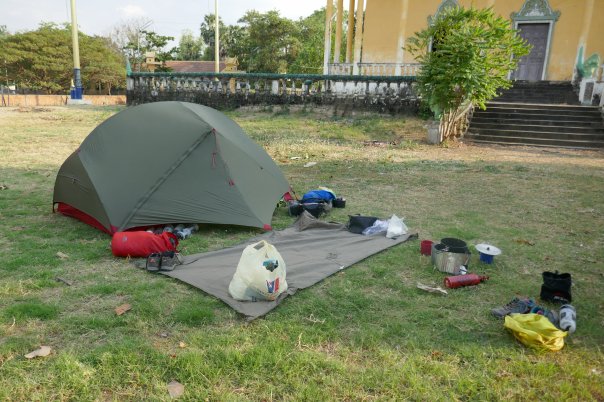 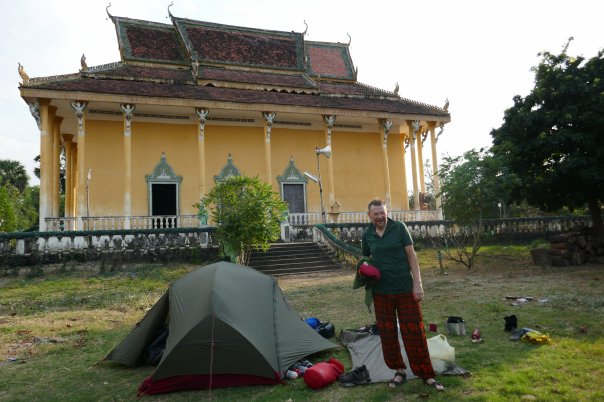 Then we set up camp, brewed and ambled into town to try to buy coffee (failed as the Cambodians do not seem to drink either tea or coffee on a regular basis) and watched a spectacular sunset over the river. We cooked our one-pot meal and then ate to the background of junior monks practising their chanting. The words for the chant were on a mobile phone and the young monk was scrolling through the text on his phone as he chanted. It all felt very strange and yet very familiar at the same time. 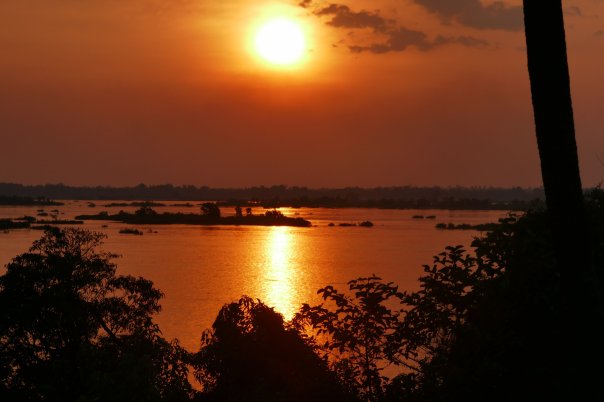 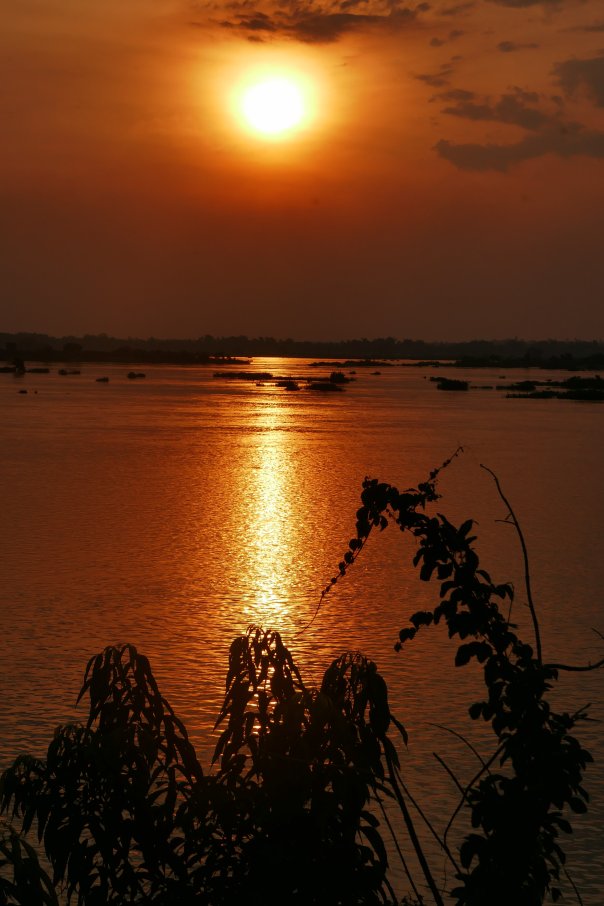 We exchanged a few words with some of the monks who spoke a little English but the extent of their English meant it did not get beyond exploratory questions – but was till far better than our Kymer. The limited conversation made it clear that we were welcome here, and that felt good. Finally we went to bed in our tent – driven there by the mosquitos – and watched an orange moon rising in the East.