Today was short on kilometers but big on ‘experiences what we have had’. I am sitting on a small inhabited island in the middle of the Mekong river in a very simple village as the sun is beginning to dip down and filter through the surrounding trees. 5* luxury it is not but 5* experience it is. 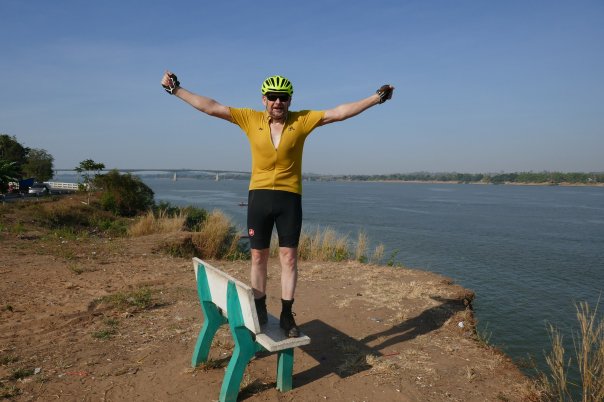 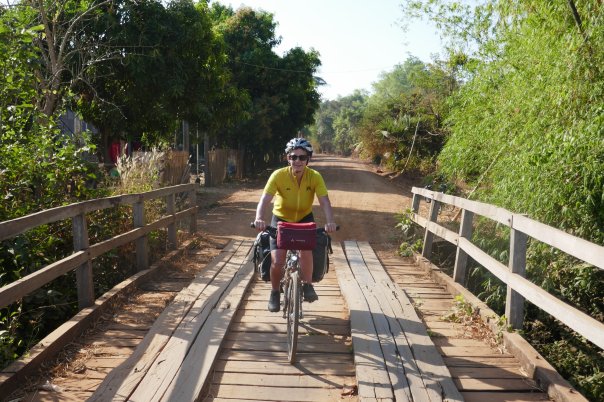 We got extremely helpful advice we got from Theara at the Cambodia Mekong Trail office in Stung Treng (if you are a traveller reading this go to http://www.cambodiamekongtrail.com and visit their office). This outfit runs tours but also feeds back into the community, they are also generous with their advice for independent travellers. We would never have found this place or known about the Homestay project without them.

As we only had a short cycle we had the luxury of a gentle start and ambled off at about 8.30. We cycled about 30km directly along the banks of the Mekong past thriving communities and lush vegetation. The first 6km were paved but then we were on dirt track, crossing numerous rickety wooden bridges. Harder work than paved roads but we were in definite ambling mode and jogged along absorbing the scenery and the joy of the wind behind us! We passed a large modern pagoda which was impressive – I wasn’t dressed for entry being in lycra shorts (and not wanting to unpack everything to cover up with my sarong) but could see most of it from the gate and listened to the tinkling bells observed by 2 small boys who were fascinated with the bikes. 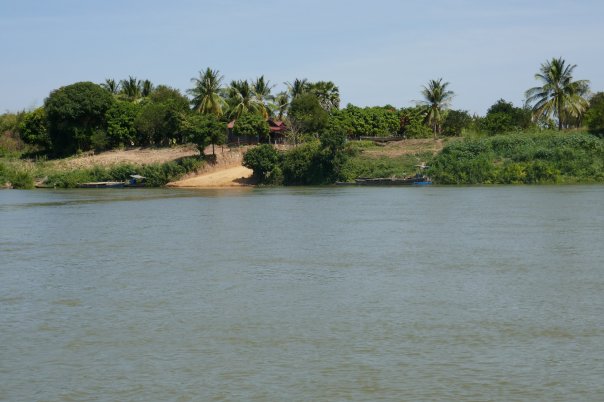 A little later on there was a side turning down to the small ferry over to the Island of Koh Preah. We had a debate about whether it was the right turning. I knew for carrying on as thought it as to soon but after a killer of kms we managed to find someone who u derstood our accent as we tried to say the name of Feb island. David had beenright (just on this occasion) so we retraced our steps and found the ferry. We wheeled on and sat around for half an hour or so while a couple of other people also pitched up for the short hop across the river. There was then a few km across the island on a tricky gravelly track to the small village on the other side of the island. The village has a programme of 7 homestays that rotate visitors and we were soon directed to typical wooden house. 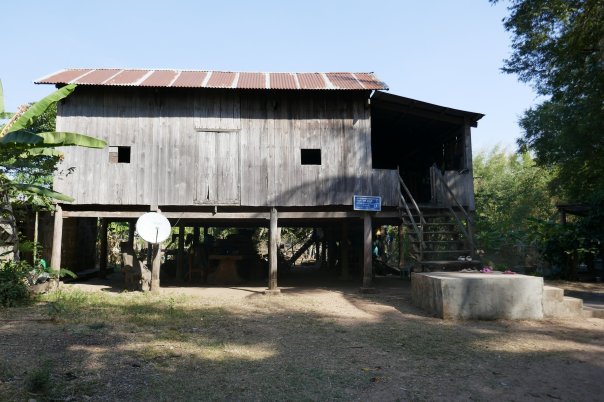 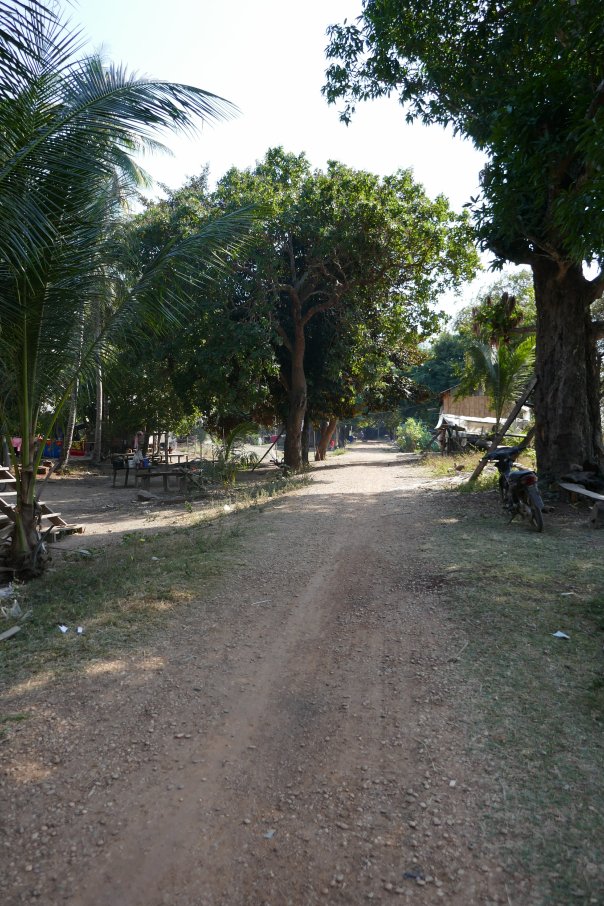 The house had one large main room -off this was a small bedroom where we would sleep on a mattress on the floor with mosquito net over. There were plenty of cracks between the floorboards to the area under the house below. At the back of was a small kitchen with an open fire. There was a small outside ‘privvie’ with water for a bucket shower. Pigs, chickens and dogs roamed around and there were children everywhere.
We cleaned up and rested for a bit and then strolled through the village. We felt rather like the Pied Piper of Hamlyn as were followed by hoards of children and the usual chorus of hellos. 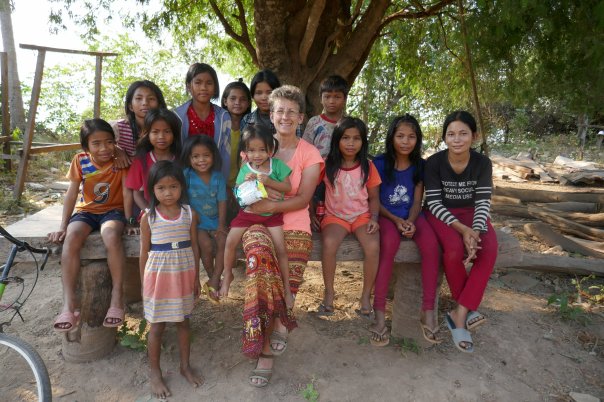 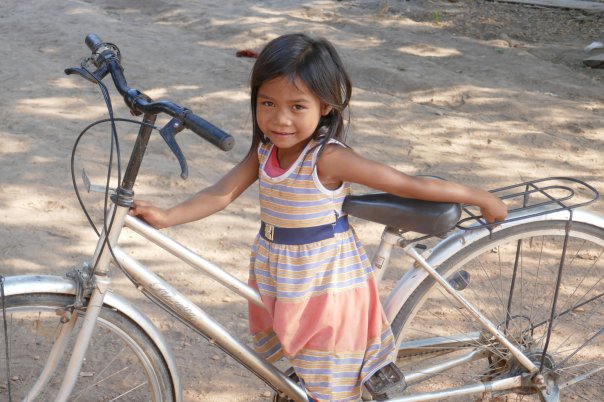 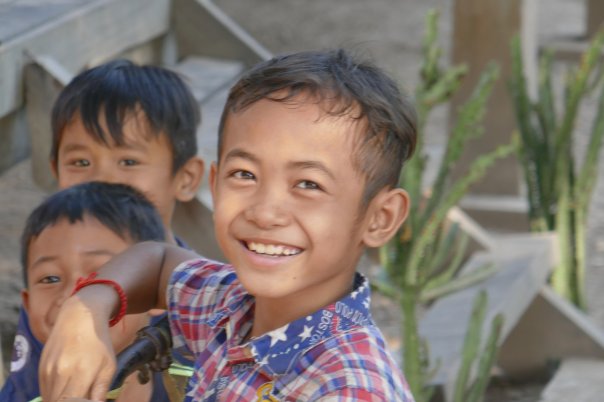 t was Sunday so everyone seemed very chilled (although I suspect it is much the same every day). The village houses stretched for about 3-400m then a path petered off into scrub land. Our aim was to find a shady spot to read by the river to get some cooling breeze – we found somewhere suitable which lasted for about 15 minute before we were ‘found’ again by groups of children – the brave ones approaching to say ‘what is your name’. By and large the mothers looked young and we saw very few older people – a result of the terrible genocide of the Pol Pot era. 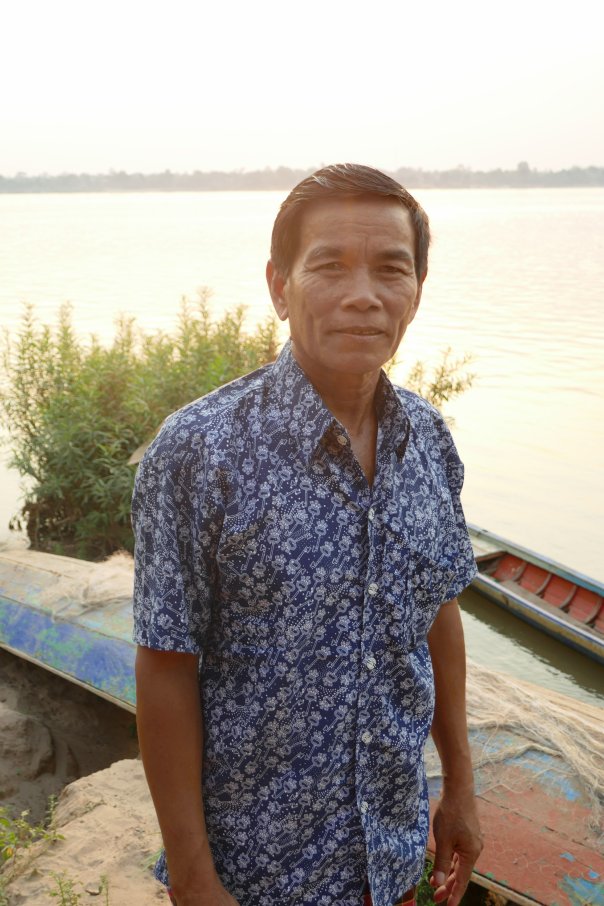 The afternoon was cooling a bit and we provided more local entertainment for the watching children as we brewed up a cup of tea and filtered water for all our water bottles. More reading and chilling, we felt very laid back and strolled back to the riverside again to watch the sun go down. A retired teacher who we think was the community head, came to chat with his limited English (vs our non-existent Cambodian) . We learnt a surprising amount. He was 64 and had retired as a teacher at the island school 3 years before. He had 8 children who were teachers, a nurse and son in the military. None lived on the island. I wonder if these communities will survive going forward. 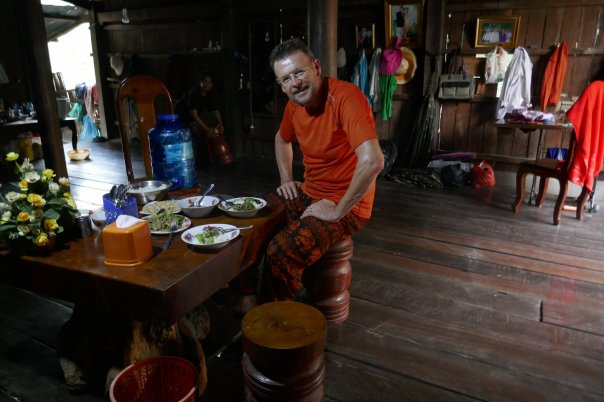 We were then provided with a delicious dinner cooked by Sovanny. A last amble in the dying minutes of light as a full moon rose then when we came back to the house we found 2 Italian cyclists, Veronica and Allesandro, had just arrived. It was their first day on the bikes after a tricky time getting transport from Pnomh Penh. They had missed the turning to the little ferry like us and arrived late. They were good company as we chatted while they had another dinner provided by Sorrany.