Today was a day that did not go exactly to plan but worked out fine nevertheless.  After overstretching ourselves a bit yesterday we resolved to have a short day with fewer hour directly in the sun.  We were in a nice hotel with breakfast included so had a proper breakfast and set off about 7 rather than out usual 6am. David had found a lovely looking homestay at the tip of a little peninsular about 45km away so that’s where we were headed.

The road was again beautiful and quiet.  Coconut, rubber and banana trees in abundance.  We passed through small friendly villages but hardly through so much as a town. It was glorious riding.   We made our way down the last 2km track to find the homestay but unfortunately when we got there they announced it was closed (it was still showing available on booking.com!). Undeterred there was another homestay on the other side of the peninsular, only a few km away but up a very steep hill – first time pushing the bikes up this holiday!  This time it was down an even smaller track that opened into a beautiful bay.  Unfortunately the homestay, which was the only building on the bay, was locked up. It was such a lovely spot that we decided we would camp but we were unprepared for that and had no food so we pedalled off again in search of provisions.  We found a tiny shop a few km further on but it had so little in that we could not even find enough to rustle up a meal (although we would have been fine if we wanted to buy 20kg of rice or any amount of toiletries!).  By the time we pedalled a bit further we had gone full circle and we were back where we started so gave up on the idea of a half-day and pedalled on south.  If anything the road was even quieter, undulating along the coastline.  But the 2 hours we had wasted earlier meant we were at that crux time of the day – at about midday – when the thermometer hit 39 degrees.  We managed another 18km to the next ‘town’.  There were 3 hotels marked on googlemaps but 2 were closed.  Luckily the third had someone there.  The accommodation was in rather shabby bungalows but perfectly sufficient for our needs and was right by the seashore. 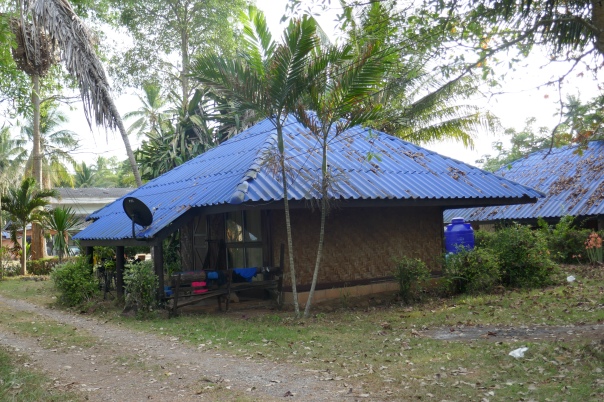 After hiding from the sun for a couple of hours and recuperating we cycled the 2km into the town centre – little more than a village really but charming and friendly.  We felt a world away from the upmarket seaside resorts we had been through further north, where there is a 7/11 or Tesco express round every corner.  Here it is small grocery stores with simple provisions but we found plenty of fresh veg, a chicken leg (all the meat comes frozen) and noodles.  We had several attempts to find bread, with the help of googletranslate, but eventually were told it was not being delivered until 5.30. 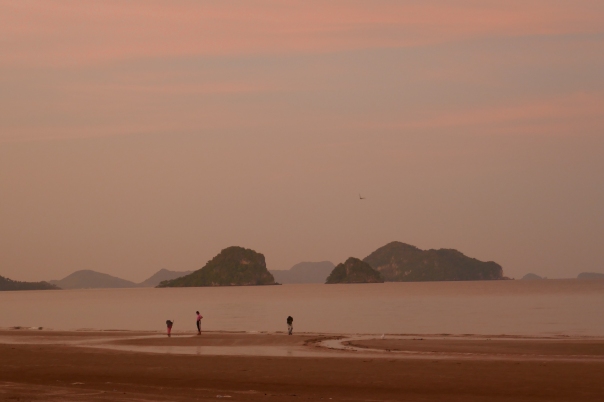 Back to the ranch for a swim in the sea – the bay so gently receding that we walked for ages to get up to our waists.  Again a huge swathe of sand, lined with palm trees and little islands dotted in the bay – and not another soul to be seen.

A trip back into town found that bread still had not appeared so gave up on that idea – it will have to be noodles for breakfast Thai style.

We cooked outside on our little stove, certain that we were the only guests. It does seem very much out of season now, which surprised us, but maybe it wakes up more as a weekend destination.