The first day of our third week in Thailand.  Today started with the 5am alarm – despite the fact that we had had a series of family calls at 3am about lost keys.  We tried to help with that crisis, failed and so a large bill was incurred.  Less said about that, the better.  Anyway we felt remarkably unaffected at 5am and even less at 6.10am when we finally set off after the resort provided an early breakfast of coffee, toast and yogurt with muesli.  The first few km were up and down with road surfaces that were fine – and we even stopped to examine a rubber tree that had recently been tapped, with the white rubber continuing to run out gently.

The road was undulating, running through jungle and yet surprisingly populated.  This is “ribbon development”, Thai style.  There is thick jungle half a mile each side of the road but parts of that corridor are cleared and developed with rubber plantations, banana groves or coconut plantations.  The road topped out at about 130m, after which it was downhill, largely with the wind to the town of Phang Nga.  The last 4 km were around the hills and back facing north, so we battled the wind that had been behind us for the last 30km – though of course we hardly recognised that there was a wind when it was in our favour.  There is a motto for life generally there but I will leave it to others to work it out.

The manager of our hotel spoke good English and arranged a boat tour for us to the bay with majestic cliff type structures jutting out of the sea.  We opted for a private tour – a bit expensive – but enabled us to control the timetable.  Our boatman was a young man and his wife and 2 children came along as informal tour guides – as it was the school holidays. 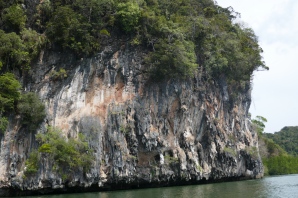 The photos do not quite do justice the beauty of the bay, but they are better than any words.  The highlight of the tour was “James Bond Island” – part of the set of the 1974 film, “The man with the Golden Gun”.  The film got mixed reviews with Roger Moore as Bond but  Christopher Lee‘s portrayal of Scaramanga as a villain of similar skill and ability to Bond was generally praised.  Thailand is still milking the connection 45 years on. 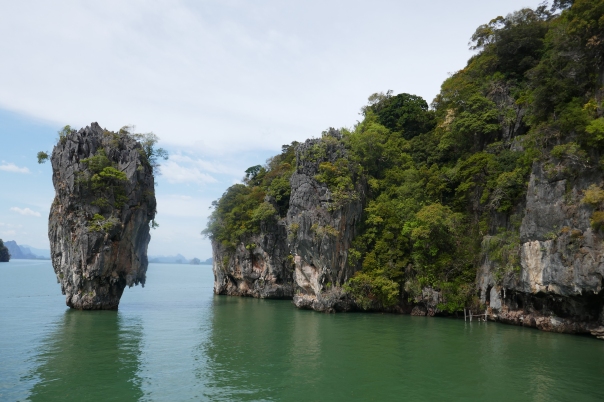 Perhaps the highlight was the mangrove swamps, where trees with roots in the salty water thrive.  On the way back we saw an 8ft python swimming yards from the boat – elegant but dangerous (just like us I suppose – that is a joke in case anyone does not know us). 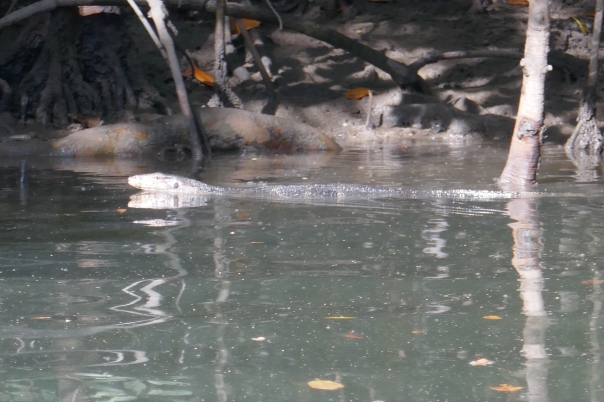 Back to the hotel and supper at a local restaurant where the service was erratic but the food was good when it eventually came.