This is by Bernie:
We woke to grey skies but at least it was not fog; in fact the skies soon cleared to a bright sunny day as we were now on highway 101 which was now more inland. It was also mostly freeway or dual carriageway as we would say it so we moved on pretty quickly. The scenery was now very different and also dramatic – dryer, hills, the road cutting alongside almost dry riverbeds.
Having passed through the hills we started to get into the wine growing region with vines either side of the road. We had been heading for Sonoma Valley but were still a bit undecided whether just to head in to spend a day and half in San fransisco. We stopped for coffee in Hopland and pondered over the guide book and both decided we were not really in city mood so stick to Plan A, namely to explore the Sonoma valley.
Sonoma Valley runs parallel to the Napa valley but according to the guidebook Napa is posh, crowded and overpriced, Sonoma may be not quite the same quality of wine but less posh and a gentler place – sounded better for us. We toyed with camping again and found one campground only in the north of the valley.
We stopped first in Santa Rosa as we needed a bag to put our panniers in for the journey home and we thought we should experience a ‘shopping mall’. There were was one just off the freeway – lucky for us it looked new and was pretty empty and half of it not yet open so it was not too
‘all-consumerising’. We found what we needed in a sports shop and soon were heading into the Sonoma Valley. We found the turn to Sugarloaf Ridge State Park – it did not mention camping on the sign but we thought we would investigate anyway. We wound 4-5 miles up a road the bottom end full of homes of those who had ‘made good’ by the looks of things but once the state park started the buildings stopped. The state parks are a brilliant system – a bit like the National Trust but there are numerous ‘state parks’ – some of them very small – but each one protecting it’s environment. Budgets to the State Parks are under threat and many visitor’s centres are now closed. Lets hope the parks remain protected.

We then arrived at a magical place. Open space surrounded by green hills and mountains and a lovely campground which had spaces. We picked our spot and settled in then decided to hike up ‘Bald Mountain’. It was 4pm when we left and still hot but but as we climbed and the afternoon moved on it began to cool. We had planned only a small circuit round the lower slopes – but there was a mountain to be climbed and the hiking sheet said it could be done to the top in 2 hrs so how could we resist. We galloped up in an hour and a half and the 360 views from the top were fantastic. We could see down into the Napa and Sonoma valleys and much much further over several mountain/hill ranges. 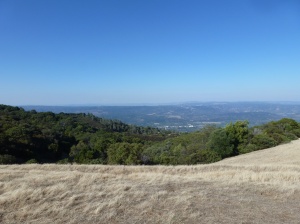 The route down was steep in places and a bit slippy without walking boots and this put some strain on David’s back but a couple of painkillers got him down OK. Near the bottom as some areas opened onto meadows we spotted some Elk in the distance – so they do exist. We watched them and they watched us until they bounded away into the bushes – about 4 adults and 2 youngsters. Magic. Further down we saw some smaller deer drinking from a creek. We were tired at the bottom but it was a great walk. 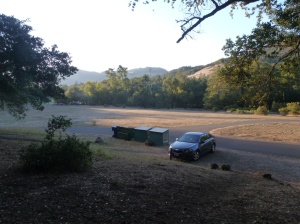 It was good to be in the rhythm of camping again – brewing tea, cooking supper over the stove, drinking “creek cooled” beer (some advantages to arriving in a car rather than bike). We have been told that there have been meteor showers the last few nights – nothing to see yet but I understand it is best after midnight – will see if we wake up to watch in the small hours or not.

1 thought on “Heading South in California”