It rained all night.  Well I say that not knowing whether it is true or not because it was raining when we went to bed, raining when we woke up and I think I heard rain when I woke in the night, but then again the sound proofing was pretty rubbish at the hotel (“rubbish” being a useful, British and general all purpose word for these occasions for our US readers) and so it could have been the people abve cleaning fish in the sink.  The motel was the only hotel I have ever stayed at which specifically exhorted guests NOT to use the hotel towels for cleaning fish.  As if we would!
We stopped at Brookings for breakfast, at an oceanside restaurant that was very busy and did really good food.  It could have stayed there and put on 30 pounds just by reading the menu.  However we are trying to eat less now we are not cycling (not always successfully it must be said).  We then strolled through the “arts and craft” market (for which read tack and new age artwork) but were deeply attracted by the stall for the Brookings Kite Flying Festival which takes place every third weekend in July each year.  The old stager who manned the stall sold the remanants of the 2013 merchansie at knock down prices and some from the 2012 festival.  He also gave us a detailed description as to how the festival worked, where we could get free buses from and the general joys of kite flying in July.  Everyone needs a passion and this chap’s passion was the annual kite flying competition.  If I get to 85 then I cannot think of anything better to be passionate about!  Meeting him was a real privilege and we promised in a way that we did not quite believe ourselves saying it that we would make every effort to be there for the 2014 festival.  I got the impression that if, by some miracle, we got there he would open his house and feed us for nothing for the 3 days of the festival just to show his appreciation for our efforts.  But I fear that perhaps it will not come to pass.

Back on the road and making our way south.  The coastline is beautiful but is stunning in a slightly repititious way after a while.  The sun helps and the clouds and rain hinder, but it is all a bit the same.  But it is a good form of “same”.  Eventally we crossed the Californian border and, within about 1 minute, saw a siren blazing police car coming towards us – welcome to California.  In fact it was heading towards a fire in Orgeon so that comment is slightly unfair. 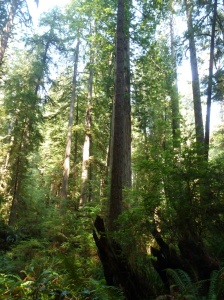 We headed into the land of the Redwoods, with ever greater displays of tall trees and bad taste merchandising to go with them. We stopped at Prairie Creek State Park where we were exhorted not to feed the wild elk. Over the previous days we had seen numerous signs promising elk jumping onto the road but never an elk to be seen. The only elk we had seen was on a roundabout in Bend (and yes it was a real wild elk). We began to think this was all a myth for the tourists. We had thought of camping but the campground was full but there were lots of lots of redwoods so we parked up and started on an 8 mile walk though the redwood glades. This is really difficult to say but – this was all a bit disappointing. The trees are very big but – as I keep saying to defend myself – size is not everything. The groves are fantastic and it is really interesting to see how fires have affected some trees and cleared the undergrowth and competition to help the big trees. But overall the forest walk involved a repeat of the beautiful views around every corner but much the same beautiful views. We felt like golfers who repeatedly hit a hole in one.
8 miles of this type of walk was OK but, but the end, even Bernie (who has a higher Redwood appreciation quotiant than me) was walking briskly to get out of the forest which eventually felt overimposing. Mind you she needed to see more redwoods the following day to get her fill of the big ones (and I repeat what I said above).
We ambled on feeling moved but gad to have seen them and finished. Eventually we found a room at a Best Western after a few false starts and realising that this was Saturday night). Interestingly the check out girl said “I just have the handicapped room which I can let you have”. I have not hearg the word “handicapped” used in the UK for 20 years as the PC word is now “disabled”. I can see limited justification for this but am sensitive to those who have disabilities being able to say how they wish to be described, and it is now said NOT to be “handicapped”. I wonder if this is often those speaking on behalf of the disabled and not the disabled themselves who, in my experience, often get far less hung about the words than the professional helpers. But them again the professionals are all about moving attitudes and descriptive words often mask assumptions about attitudes. In the states however “handicapped” is still in common parlence.
The room – suitable for a handcapped person or not – was fine and we were soon asleep.