We woke, packed up and left only to find both tyres on the trailer on my bike were flat. We changed one and pumped up the other (which had a slow puncture and needs sorting later). Eventually we got going and then cycled away from the river through a wine growing area. 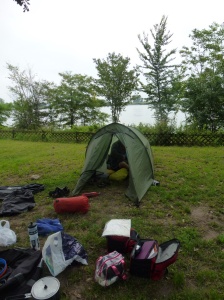 It was fine but we had a series of bike issues which needed attention. Then we got to Worms and stopped at the ubiquitous McDonalds because they have free, reliable internet. They also now produce half decent coffee at the McCafe.

Loading the blog, sending a few emails and generally mucking around took about an hour and we could tell that it was just going to be one of those days when things do not go to plan. We managed to fit extra water bottle carriers to Bernie’s bike but otherwise Worms was pretty missable (and was missed). There are times when we feel like culture vultures and just have to scoop up everything that is available, and other times when we are quite happy to let the culture bit pass us by. At least we are not part of an organised tour where it is all fixed for us and all we have to do is turn up each day and feign enthusiasm (and we have seen more than a few faces in such groups which plainly say “Beam me up Scotty” to get me out of here). No such hassle for us, because travelling under our own steam means that we set the agenda – or do not do so as the fancy takes us.

After Worms we had a bit of a mapreading “mare”, as Pippa would say. We tried to follow the signs to Speyer but got lost, ended up on a dirt track and then repeatedly got the wrong track. We tried – honest we tried – but the signposting did not help. There was either a total lack of signposting or an over abundance with signs pointing to Speyer in 2 different directions (both with the same distance). Repeatedly we would travel 5km and then find the signs suggested we had only reduced the distance to the mythical Speyer by 2km (if at all). It was as if some malicious divine hand was moving the city continually just to irritate us. We had planned to go past Speyer to Germersheim but that started to look optimistic, to say the least.

Then my mobile went and I agreed to do some advice for a long standing client, and so it was settled that we would get a hotel in Speyer. We eventually reached this place, but not before the bike path was closed, we were re-routed around the countryside only to end back up at a town we had left 30 minutes ago and come close to despair as to whether the place existed at all. However it did and the charm made up for the frustration. It was a major city for the Holy Roman Empire (which to be honest would not comply with the Trade Descriptions Act because it was not terribly holy and was not centred on Rome, and could only just qualify as an empire). However the church in Speyer was a wonder. It was finished in about 1120 and is the size of Westminster Cathedral. It is magnificent rather than beautiful with the insides being quite plain but is a fantastically impressive edifice. 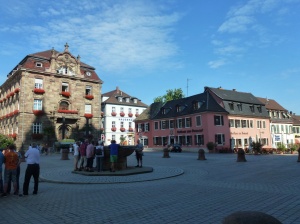 For the first time we had difficulty in finding a hotel. There was a big event, the Kaiser’s Feast, being held in the town the following day and it was humming. Several hotels were full (or pretended to be when offered custom by some grubby cyclists) and so we ended up at the Ibis. Although characterless, it was clean, had internet and hence I settled down for a long evening and short night to try to get my work done. We broke up the evening at about 9 and walked the short distance to town for a mediocre burger but this was redeemed by a delicious ice-cream brought as the town started to shut up shop – Germany not being a ‘late’ culture a la Spain, who would have hardly got going at 10pm – which we ate strolling round the outside of the beautifully lit up cathedral.