Bernie: David had a very early start to finish and email off his work. As he came back to bed for an hour’s sleep, I woke up and caught up on the blog. When David woke again we had breakfast and were on the road at 10 after a final brief look at the cathedral.

David was feeling dopy and I came out in sympathy but we both enjoyed the first section gently pedalling along the tree lined dyke full of flowers to Germersheim. The bike path after that was closed and we diverted to bike paths alongside a quiet road. It was quickly heating up – 30C – and was very humid so not pleasant conditions for exercise.

We felt drained by the time we reached Leimersheim so stopped at a Pizza restaurant with a shady terrace and drank sugar laden coca-cola and ate large pizzas. Half way through a very large butch male in a very small red dress came and had a coffee. Clearly a local, no-one batted an eyelid and I was determined to be completely cool about it and not stare – although he/she was very eye-catching. Eventually I had to whisper to David with those famous instructions ‘don’t turn round but…….”.

We saw this great model of a scarecrow in a punt and David just had to take some  photos! 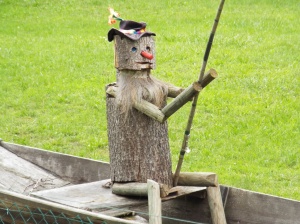 We both felt better after re-fuelling, The main route crossed the Rhine to go through Karlsruhe but we didn’t fancy another city on a hot day so we opted for the alternative route staying on the west side to Worth am Rhein – a pleasant route passing through flood polders (low lying ground that is flooded through sluice gates when river levels are high – these ones created after devastating floods in 1995). Shortly after Neuburg we suddenly found ourselves in France – not a passport control to be seen but the bike path signs had changed to French – we could even understand them! 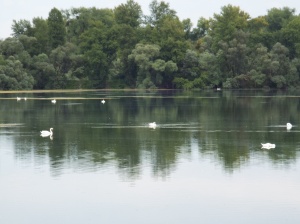 The bike path bypassed Lauterbourg, the most eastern town in France (quiz question!), taking us past gravel works instead! Just another 15km and we reached the campsite at Seltz – on the banks of another gravel pit – looking in one direction you could even miss out the view of the gravel works – but in spite of that it was a nice site with a grassy area for tents and beach area full of children, and a swim in the lake at the end of the day was glorious. For once we had arrived in good time so after we had cooled off we pedalled the 2km into the town (no luggage!) and had a drink at a bar. Seltz town definitely not a tourist centre but an ordinary bar in an ordinary town with ordinary people – and very pleasant it was.

Back to the campsite where we cooked and ate watching the sun go down over the lake and flocks of small birds flying in their amazing formations (just had a brain gap on what to call a group of birds to find from google that it is not that simple – I rather like a Flamboyance of Flamingos, but they definitely weren’t long and pink, or a Charm of Finches, but think most likely a Flight of Swallows). However at that point came the sudden emergence of vampire mosquitos. Not surprising really given the warm wet location but we weren’t prepared and I though of all that insect repellant left at home.

We quickly had to retreat to the tent, zip up the mosquito netting, whop any b**gers that had already got inside and read until the air had cooled and eyes drooped – which did not take long at all, in spite of raucous laughter (or was it some exotic bird we had not spotted) and children playing outside.