So, it was time for the off. A pleasant breakfast at the hotel with the glimpse of the Blue Mosque minarets from its top floor restaurant probably billed as a ‘view’

We packed up and said a friendly good bye to the hotel staff and freewheeled down the hill over the cobbles of the old town to the nearby ferry port. We negotiated getting on to the ferry, a friendly young chap helping us get in the right queue, and we pulled away from Istanbul to cross the Sea of Marmara to Yalova ,thereby avoiding a days ride through Istanbul suburbs (for those new to our blog, ferries don’t count as cheating as you can’t cycle across water). 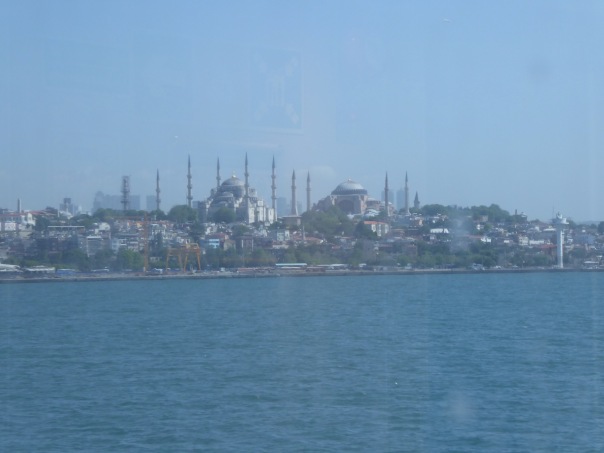 My inability to understand Turkish when booking the tickets on line meant I had booked first class seats (something labelled eco I took to mean economy) so we had a very plush ride!

We pedalled off the ferry and after as brief stop for provisions found our way out of town pretty easily – well there was really only one road, the main road to Bursa, a large dual carriageway but with a broad shoulder we could cycle on so not too bad. I knew we had to go over a ‘hill’ out of Yalova but we hadn’t quite anticipated a 350m climb! It was also 30 C and quite humid and we felt very unacclimatised but as always we got to the top and rewarded with a long downhill to cool us down (again, those of you new to this blog will quickly come to realise our obsession with how many meters climbing we do and the temperature – our other main obsession being food).

At the bottom of the hill we turned off the dual carriageway and on to a quieter road for the 40km to Iznik, most of it following Iznik lake. To start with our view of the lake was mostly obscured by olive groves and we had our first picnic in the shade of olive trees.

We both admitted afterwards finding the final stint to Iznik tiring and feeling rather alarmed at our level of tiredness after a relatively short day…..but our fitness is what it is and we will get fitter, we will get more acclimatised and the whirlwind of the last few days before departure will fade in to the distance.
We didn’t have out usual rule of it’s raining and so we will get a hotel, so we made up a new rule that we were tired and therefore needed a hotel! Iznik sits at the far end of the lake and we booked in to a hotel with a lovely view over the lake. We were fairly certain we were the only people staying in the hotel so negotiated rather meanly to get a cut price (old habits die hard) – but we paid for the discount when we found we had no hot water (it is being repaired….wait 5 minutes etc etc….). So after a ‘refreshing’ shower we wandered into town. Iznik is a proper buzzing little town with the remains of an encircling roman wall and fortifications, several 14thC mosques and a musuem in what was described as a ‘soup kitchen’ built by a sultan for bis wife. We were unable to clarify what that meant as the ‘soup kitchen’ was a large multi-domed building but along with almost every other building in Iznik it was closed for renovation.

We could see Iznik had potential for a good tourist stop but at this point it was well and truly closed! Soo we just enjoyed just strolling around, stopping for Cay and lemonade .

We got  back to the hotel just as a thunder storm passed through (so we didn’t need our new rule after all and could have continued to convince you all we are hardy types and not really here for a holiday…..)
In the evening we strolled out again along the lake shore to find something to eat. Cafes here only do drinks so you need to look for a restaurant. Unfortunately there was a big football match on and the only restaurants were showing the match at full volume and crowded with cheering male supporters. We found a cafe/restaurant which had a menu and had one of those experiences which made us feel we were really back on the road. Every item we pointed to on the menu they did not have, except for one. We didn’t know what it was but ordered two of them and hoped for the best. We ordered with potatoes, which with any luck might be chips but he then came back to say there were no potatoes! Anyway – it turned out to be like a cheese toastie with some salad. OK but we had to fill up on the last of our snickers bars back at the hotel! Note to self….. don’t run out of food! 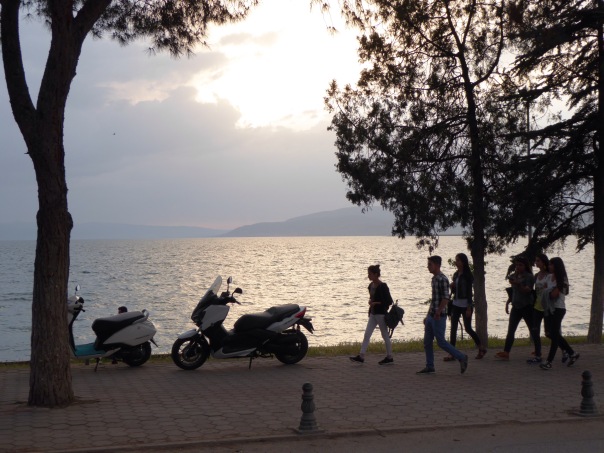