I am typing this in a lovely apartment where we are being hosted by our new friends Mehmet and Ahmed. It is early morning and they have gone to work, leaving us alone at their home. Such incredible hospitality is not so uncommon in this great country.

For those who are unaware of the “warmshowers” phenomenon, let me say a few words in favour of the geniuses who created http://www.warmshowers.org. This is an online community of touring cyclists across the world. We register to host touring cyclists (for nothing) and can ask to be hosted by other members. Membership is free and the site is kept going by donations. The key to trust is reviews – we leave reviews for our hosts and they leave reviews on us. It is – as our daughter Becky explained – “counchsurfing for cyclists”. No money changes hands, friendships are made and lots of great memories are created.

Anyway back to the trip. We woke and packed up in our lovely campsite by the river. We knew we had a short day so lingered a little. Just as we were ready to leave the cows came back over the bridge. The young boy whose photo we took yesterday arrived with his (basic) phone (or possibly someone else’s phone borrowed for that purpose) and wanted a photo of us – so we obliged. Smart phones are everywhere in Turkey and the mobile coverage is great. I suspect there has not been any investment in landlines for years because everyone uses mobiles

After all the cows had passed we wheeled our bikes up to the road and started the long but shallow climbs on the road to Konya. 60km later and a few more ups and lots of downs saw us reach the massive city of Konya. We had arranged to meet Mehmet via Warmshowers and had no trouble finding his flat (immediately above Willy Wonderr’s Coffee Shop which helpfully provides free wifi). 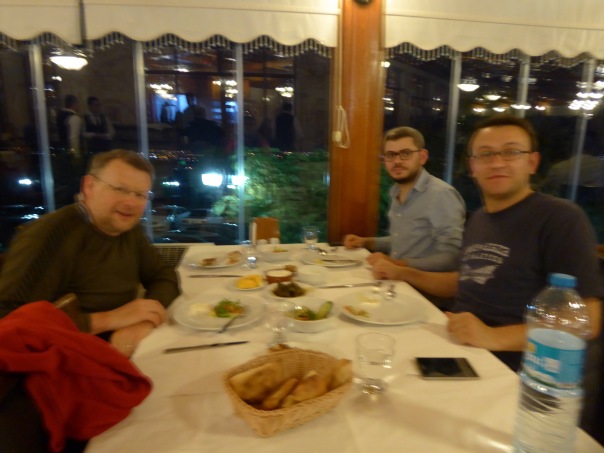 Mehmet and his brother work in the family Foundary and metal casting business and he has many customers in the UK – and he knows Dudley, Stourbridge and Birmingham well. He will be back in the West Midlands before us, which made us feel that it is a small world indeed. Business is tough because many of his customers are in the oil and gas industries that are affected by the drop in the oil price, but he is the Sales Director is clearly hugely able and dedicated to making the business work.

We showered – since that was necessary after 2 nights camping and is the point of the website – and then went out to see Konya. This city has a population of 1.3M and is growing. Construction of new roads and buildings is everywhere (although there is concern that the property boom may be based excessively on credit and thus could stall like Spain or Ireland). It is a thriving industrial city but combines this by being the centre of Islamic tourism due to being the place the great Islamic teacher, Rumi, made his home after leaving Afghanistan in 1220. His followers created the whirling dervishes – where a trance like state is entered to enter the presence of God during ritual dancing. 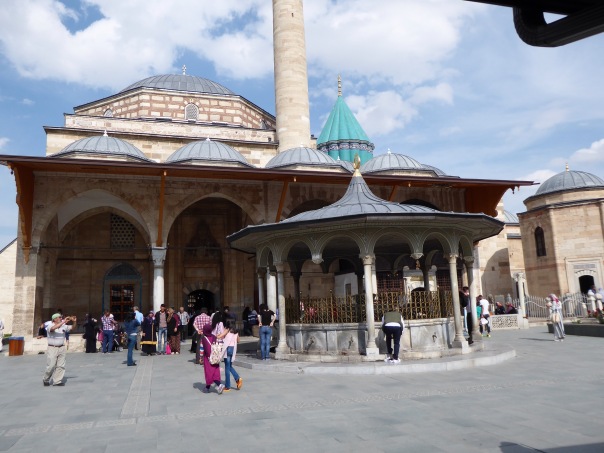 The Rumi doctrines of tolerance to all, mysticism and self-knowing after years of study make a stark contrast to the approach of whahhabism which dominates the thinking of IS and Al Qaeda. The centre is the Mevlana Museum which contains the tomb of Rumi – also known as Mevlana – and his key followers. It starts with a beautiful rose garden and then there is a superb mausoleum with fantastic calligraphy on the walls and displayed books.  The devotion of followers was evident amongst the crowds. They hustled and bustled around the site with all the devotion of nuns or priests visiting the Vatican for the first time. It was a sunny, warm afternoon and was a complete delight to be in such a special place.

We returned to the flat via the lovely Aladdin park in the centre of town where we saw groups of young Turks walking around. There are just so many children here – happy, smiling and squeezing the sponges of their young lives. We also saw teenagers walking, talking and laughing – often groups of girls had some with headscarfs on and others with T-shirts with English writing saying the usual type of slogans one would see on Oxford Street – and occasionally the combination of a headscarf and a very unIslamic T shirt slogan. This may have a reputation as a very conservative religious city but there was clearly tolerance at the heart of it as well and not everyone conforms to a religious stereotype. However one result is that virtually nowhere is licensed for alcohol, maybe half a dozen places in the whole city – much to Mehmet’s regret!

Mehmet and Ahmed took us out to dinner at a restaurant overlooking the city. The food was just fantastic – slow cooked lamb, aubergines, salad and the most brilliant okra soup to begin with. We chatted (in English of course) laughed with our new friends and felt privileged to be in such company.
Later we went for coffee and met more for their cycling friends – all but Mehmet were also smokers. The message about the dangers of smoking is slowly getting through to educated Turks and is prominent on cigarette packages but often it is printed in English so maybe is of less power than it could be. Again delightful people and lots of fun. What a day!