We had a nice, leisurely morning sorting ourselves out and then cycling the few minutes back into the city centre. We visited the Tile museum in a fantastically restored Seljuk era madrasa (1251). The ceiling and upper walls were lined with wonderful blue and white tiles. The building itself was more impressive than the ceramics displays, although there were more patterned Seljuk tiles from excavations of a palace near where we camped at Lake Beysehir.

We then strolled round the Grand Bazaar and were struck by how clean and ordered everything was. After stocking up on some basic provisions we headed back to Mehmet’s lovely apartment for a simple lunch and final pack up and were on our way again about 1pm.

The road out of Konya was not as pretty as the road in, passing through the industrial heart of the city’s economy but eventually we turned east again (well north east) off the main Ankara road towards Aksaray. The road was straight, flat and very barren for about 45km. The wind had been swirling round us in the city but thanks to God, Allah, any other deity or just pure luck, the strong wind was firmly behind us. We flew along the flat road . The road was boring with just mile upon mile of brown empty landscape, the legs just pumping round and in spite o the tail wind I struggled for the first hour until I found the right headspace and rhythm for that type of cycling. 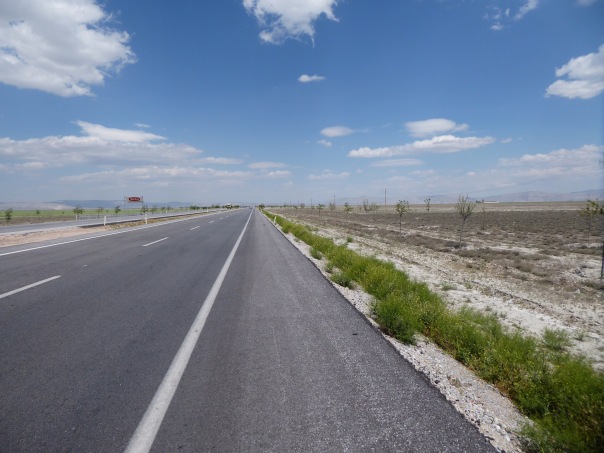 In the distance we could see some hills which gradually got nearer and after about 45km the boredom was relieved by a climb over a series of small hills. On the other side the tail wind was still as strong but the land was more fertile and, after a while, became a little more populated. In a few places we passed small huddles of plastic shelters on the edgers of villages and wondered whether these were signs of refugees. Up to now we have seen nothing of the massive influx of refugees into Turkey from Syria. 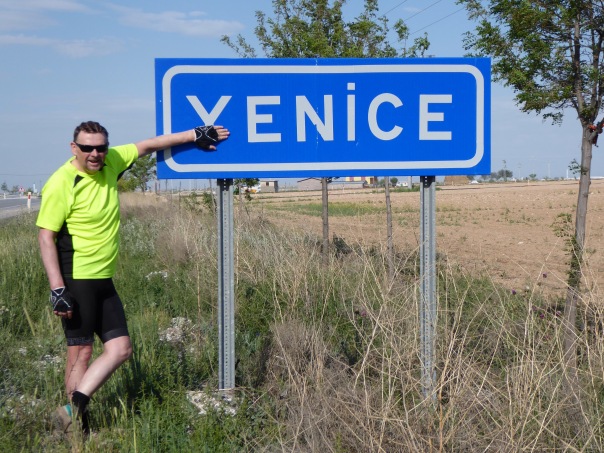 We came across the village of Yenis – and so pretended we were back in Italy!

At about 65km we finally found a tea stop at a little shack at a petrol station. Although if we are camping, we like to find a spot and settle in by late afternoon, we decided we would keep pressing on 1) because the land was still flat, barren and blowing a gale with no shelter and 2) by tomorrow the wind may have turned and we wanted to make the most of it blowing us along apace. We had our eye on one spot where there was a lake marked on the map but when we got there, there was no water, just marshy land and still no shelterhe village of Yenis whatsoever. Just before reaching Sultanhani where we had decided we would stop whatever happened a hotel suddenly appeared like a mirage. Large, swish and empty we negotiated them down from 180TL to 120TL (about £30 – old travelling habits die hard) and decided that would be preferable to being blown away in our tent overnight. We had done 105km and only left at 1pm. We will never cover ground that fast again I am sure!
We were tempted by a nice spicy lentil soup in the canteen style restaurant next to the hotel (clearly designed for tour groups) but not by anything else so we ate up our hard boiled eggs, salad and peaches that we had brought for camping in our room and felt satisfied. A rather weird cycling afternoon but it has got us within striking distance of the Capadoccia region tomorrow which we are really looking forward to.