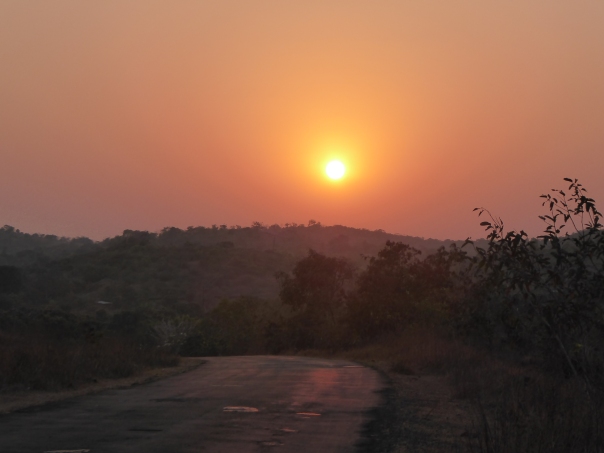 We turned west back towards the coast, the relentless up and down unchanged and often very steep. Each climb taking us to about 70m. As we hit the coast and turned north towards Ratnagiri the hills evened out a bit but we had still climbed over 500m by the time we stopped for coffee and delicious potato bargi’s in a little road side caff that was packed. It being India a cow watched us through the door – an event that seems utterly commonplace now!

Our next section was wonderful. The road hugged the coast with mini ups and downs but no major climbs (most of the ‘coast road’ since Goa is in fact a few km inland so we have only touched the see from time to time). The vegetation was lush and we passed beautiful bays of endless white sand, completely empty and unspoilt. Perhaps that’s how Goa used to be before the tourist invasion.

The little town of Ganpatipule was busier. Cars were queuing to go through the check point down to the beach. The guide book tells us that at holiday times (this weekend is a big holiday weekend) hordes come to the seaside temple which houses a bright orange monolithic Ganesh. We left the devotees to it and passed on. 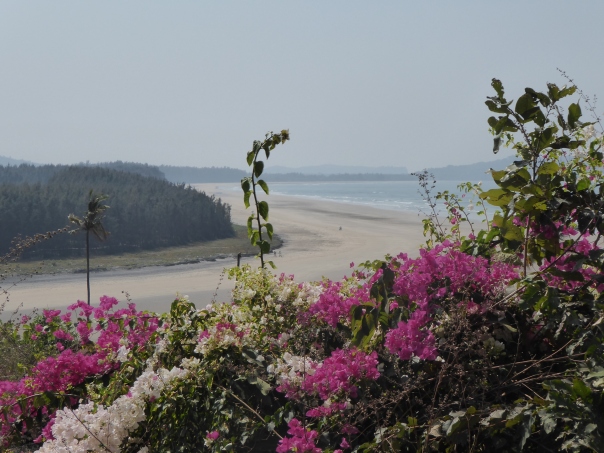 Next stop was Jaigarh. What was perhaps a pretty little port town was dominated by an enormous power station, but we sort of missed the town by going down a side road to the port area (which was as attractive as port areas the world over). Our destination was a ferry across the wide river estuary. 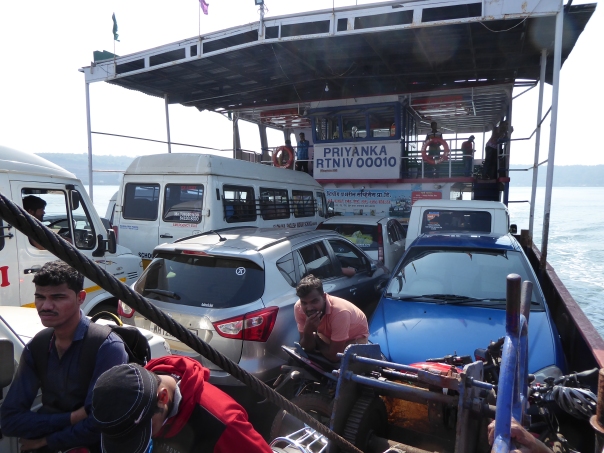 We cycled past a long queue of cars just as the ferry was being loaded, which saved a considerable wait as they cannot be more than one an hour at best. The ferry crew were cramming as many vehicles on as the ferry could manage – and then another that was squeezed on as long as the bow door did not need to close. I doubt the lessons learned from the Herald of Free Enterprise disaster have been learned here, and who needs closed bow doors in any event! Around the cars and trucks, the crew waved on the motorbikes and our bikes. David’s bike was wedged between a car and a van and mine next to a motorbike. Someone said ‘tickets’ so I ran up the slope to what looked like a ticket office but no one there and I was waved back to the boat as I said ‘ticket, ticket’. In the end, no one was fussed whether we had a ticket or not. As the average ferry price has been 10 rupees each (12p) I didn’t feel we were diddling anyone out of too much!

We knew the last section was going to be tough. Google maps on the ‘walking’ setting gives us the profile for the day and David had counted 4 climbs in this 20km section. The route did not disappoint – it was tough. The climbs were steeper than ever. The first descent and road round a little bay and ascent the other side was made worse by the fact that the road had completely disintegrated and we were juddering over stones. We only had 15km to go but at that rate I thought we would never get there. Luckily tarmac returned but each climb had a gradient of at least 14% and our energy was sapping.

Finally the last climb was over and we approached Velneshwar. Now to find our guest house. We have tended to book somewhere a day or so ahead. Those who told us that there is plenty of accommodation everywhere in India have clearly not been to the remoter parts of Maharashtra. There is no sign of accommodation for most of the coast road, with only “resort hotels” at a few points.

We happened to hit this accommodation desert at a big holiday weekend and thus virtually everything that did exist was fully booked; except for the guest house we had booked the night before. We (not so rapidly) found that this might be because it does not actually exist in the place that ‘booking.com’ places it.

We cycled round trying to find it but the directions took us into a gated new housing area where the men had never heard of it. We tried to ring – no answer. It seems it is actually 4.5 miles from the next town, which was 20km away, but had no idea where it was in relation to the town. What was clear was that the googlemap on www.booking.com was hopelessly wrong, and thus the directions to that non-existent place were equally useless.

It was now 4.30pm, we had cycled 108km and climbed 1300m and we were exhausted. We had passed a large hotel coming into to Velneshwar so cycled back to ask if they had rooms. Mercifully they did – mainly because the hotel was at least half in a state of being a building site – but a working one! They had opened up a few rooms month ago as a ‘soft opening’ we were told, while the building was being completed.

Another bizarre place to stay but the room was enormous and the guys at the front utterly charming. I was later given a proud guided tour, including the area where they had planted 5 different types of lotus plants and we were given a delicious fish curry for supper – with extra chapatis for hungry cyclists until we said we had had enough! Luckily a happy ending as we watched yet another sun go down into the sea.   We have emergency bivvi bags but were jolly pleased we did not have to use them tonight!