So today we cycled from somewhere I had never heard of to somewhere else I had never heard of, and passed through lots of places that are equally unknown to me – and probably to the vast majority of the readers of this blog (i.e. if 10 of you read it, I would wager that the place names mean nothing to at least 9 of you). For those less familiar with Indian geography, we are north of Goa and today cycled from about 250km south of Mumbai to about 170km south of Mumbai. 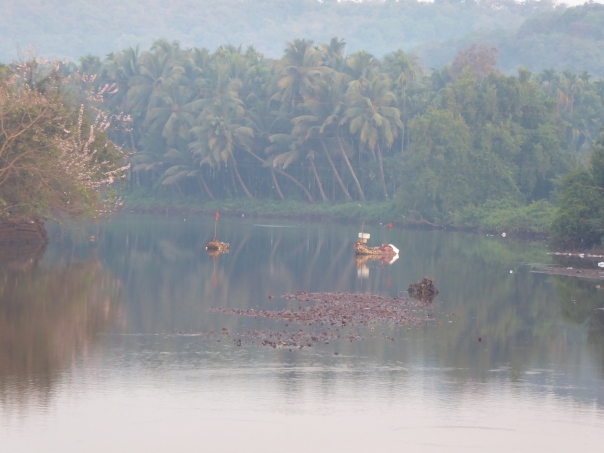 However, just in case anyone is intimately familiar with this area, we started downhill from the Sea Breeze hotel in Velanshwar, wishing them well with the plan to complete all the building and fit out works within a month. I suspect that workmen (and it will be men) will still be on site in the autumn but it will inch closer to completion each day.

The first 18km flew by and we reached the seaside town of Guhager. There was one climb in that section (about 150m) but it was only about 6% and so felt like an amble after yesterday. 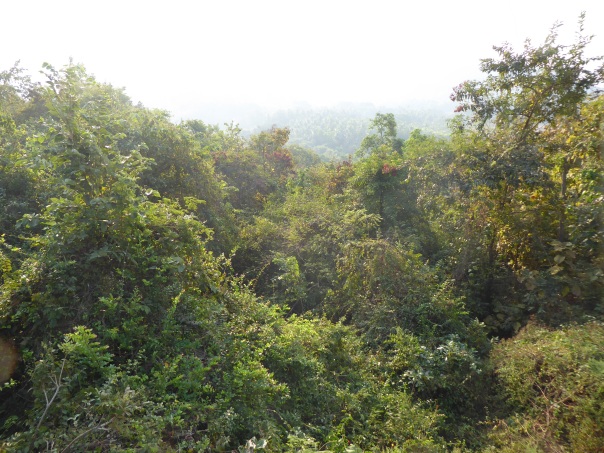 Then we tackled the second climb as we surmounted the headland towards the ferry at Dighi. There were 2 ferries marked on the map but only one existed and, of course, we headed to the wrong ferry point and had to pick our way along some back-streets to get to the right ferry point. These ferries link communities along the coast where large rivers or sounds are too large for bridges. There is an impressive line of bridges that span the smaller rivers but this was about 1km across and so a ferry was the only way to keep the traffic moving.

It would not be right to say that loading and unloading was disorganised chaos. It was more like organised chaos. The ferry is not a “ro-ro” type so vehicles have to drive and reverse out, or vice versa. Add a series of tight turns by vehicles on the quay (whoops – no further or your in the river), a bus or two reversing into a space too small for a bus (but somehow it just fitted), haulage lorries, foot passengers, numerous motor bikes and a total antipathy to any concept of queuing and you get the picture. Then add in that everyone is talking loudly and at the same time, as well as taking family group selfies, and the picture is almost complete. It is, though, delightful chaos and a lovely way to do people watching.

After disembarkation – the same organised chaos but in reverse – we trundled off up yet another hill. This was hill 3 of 4 and was not too steep. We felt good, the miles clocked along and the day seemed to be going well.

But then reality hit was we made a bit of a wrong judgment call. The “main” road – not terribly main and often only just a road – went inland and the walking route on googlemaps took us along a minor coastal road. We followed googlemaps, to our shame. The road was just about OK as far as the seaside village – rough in places but we were able to cycle. Then it deteriorated into a dirt track and was so steep, it was more suitable for goats than cyclists. Pushing heavy bikes with full panniers up a 21% track for 2km with no road surface in the heat of the day is not my no 1 idea of fun. In fact we shed buckets of sweat and cursed Mr Google regularly. However, to be fair, Mr Google never said it was suitable for cyclists – the “cyclist” button does not work on googlemaps outside Europe so it’s walking or driving.

Astonishingly, we were passed by motorbikes and even a truck (although it was going down and would not have made it up). Eventually we got to the top and I drank a full bottle of water. It was just downhill now and then along the coast.

However there were 2 clouds on our personal horizon. First, the coast road existed in name only. It was a track which rapidly became a path and that became impassable. So it was back to the main road which took us inland. 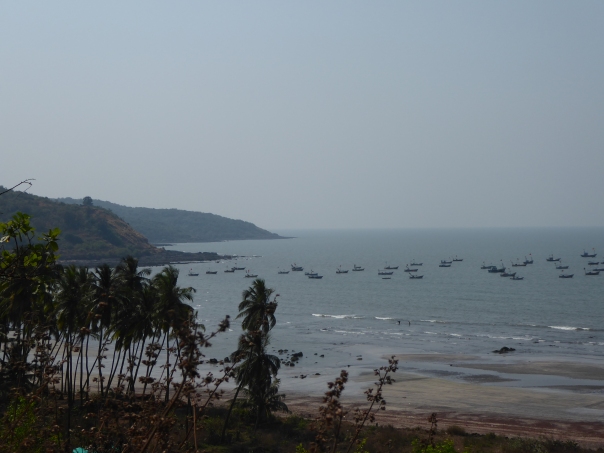 Secondly, we had not been able to book any accommodation, and when we started asking, we soon found out why. This was Saturday of a holiday weekend (think August Bank Holiday) and the masses of the great cities of Mumbai and Pune descend on the beaches with all their families (including great auntie Sattie) in vast numbers. So there is no accommodation for love nor money anywhere within striking distance of the beach – that is striking distance with a car or motorbike.

We did not know this for certain when we set off this morning but got hints from the all the “booked up” notice on www.booking.com. It rapidly became clear from the pained expressions on anyone’s face when we asked if they had a spare room. We were told in gentle but firm terms that there was no chance; you are joking – rooms at the beach were as common as tickets for Tendulkar’s last test appearance (if not more scarce).

We were advised to strike inland to Dapoli. Inland means “up” and Dapoli was 10km inland and 200m up. We tried various hotels and were met with the same “you want Tendulkar tickets without booking in advance?” type response.

However, to our great relief, once we got to the town of Dapoli, we found a hotel on a side street that was perfectly functional and nearly empty, all for the cost of 1500 rupees (about £18). We have bivvy bags and got close to seeing ourselves camping out rough on the beach but we are not 25 any more (despite pretending to be) and the hotel was a relief.