(David) Today was not the day we planned. We started it by waking up in a campsite and ended it having a lovely meal with new friends, staying at their villa having swam in their pool and completely changed plans for the next few days – and only cycled 44km, most of which was downhill. 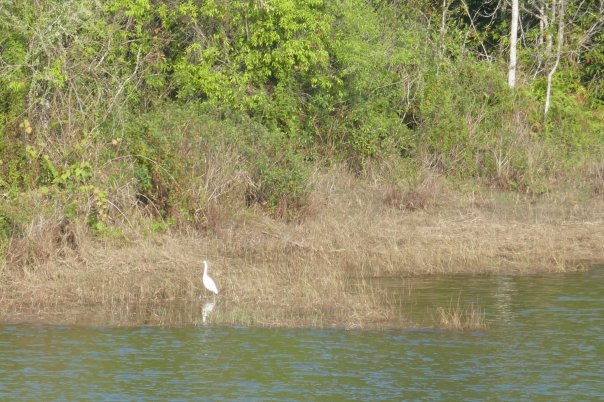 To try to explain how all this happened by fortuitous accident, I need to explain that Bernie was not feeling 100% up for a long day cycling. A lurking cold and putting her body through yesterday’s climb (on top of the last few days) was taking its toll. Day 4 of these trips is often a low point where our limited fitness means that we don’t quite recover from the physical exertion of each day’s cycling and so tiredness accumulates. Add a big climb and this was the day Bernie’s body was objecting – and it was probably fair enough.

Anyway we broke camp, breakfasted and cycled off as best we could in the early morning cool. The jungle is never quiet but the roads were empty and the only sounds we heard were the birds and the occasional unidentified animal in the undergrowth. It was peaceful and calm as we rode up to the Visitor’s Centre and then began our descent along the same road we had climbed the day before. We knew there were some 16% sections – going as slowly as we could, gripping the brakes with all our might and praying that the cables did not break (they didn’t). Then the gradient eased and we whizzed down the 7% sections, reaching the park entrance in no time. Humphhh said Bernie – that took us 2 hours yesterday and we got down in about 15 minutes.

We then pottered northwards, passing the road where we had joined the day before and heading towards Pak Chong. It was hot, busy and seemed to involve more “up” than we expected. Bernie was doing fine but not enjoying herself.

As we crossed over the motorway we were overtaken by 2 local cyclists – on road bikes with no panniers and all kitted out for an early morning ride. The man introduced himself, said he was Swiss and invited us for coffee. He then spoke in a hugely impressive way to his riding partner, who was a tiny Thai lady who he introduced as “Moo” meaning a pig in Thai. He explained that Thais are given nicknames as very young children and they have them for life. Moo was beautiful and graceful, and seemed the most un-pig-like person imaginable, but was stuck with the name. Othmar explained that he was a retired Swiss gynaecologist and that he lived in Pak Chong with his wife, Jackie for part of the year.

Part of our rules for travelling is to accept offers of hospitality unless it is clear we should not do so. So we gratefully accepted Othmar’s offer and followed him and Moo for about 5 km. Moo peeled off to her own house a few blocks from the finish, and then we entered the quiet, serene atmosphere that Othmar and Jackie have created for themselves in their beautiful villa. It was reminiscent of staying at Adit and Archie’s house in Delhi – a calm oasis at the edge of a bustling city.

We had coffee and chatted, and soon made up our minds to accept their offer of an overnight stay. After a sleep, a bracing swim in the outdoor (unheated) pool and a few hours planning, Bernie felt a good deal better. Having time to consider the maps and guidebooks we decided to change plans and not head north east to the Laos border but go back to our original plan and head due east to the Cambodian border. It’s good to have plans but such a joy to be able to change them on a whim once we were finding our feet and got more information. 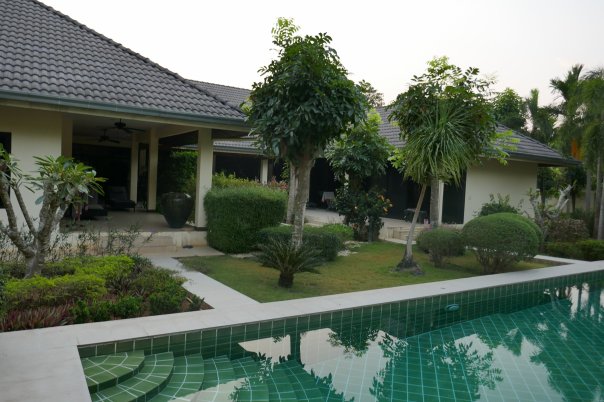 Moo and her husband, Eddie, came over for a beer in the early evening and then Othmar and Jackie took us to a wonderful restaurant for scrumptious Thai food. I could not begin to describe the delicate balance between the different flavours, but it was wonderful. We also had long discussions about Thailand. Othmar and Jackie have lived here for good parts of the year for nearly a decade and were informed and intelligent observers of all things Thai. It was a total privilege to listen to their views and understand more about the country in which we are travelling and its people.

Meeting with the Othmar on the road was, of course, a pure coincidence. If we crossed the motorway 5 minutes later or they had not lingered at their tea stop (where Moo had amusingly got herself locked into the Ladies toilet), we would have missed each other. But fate was on our side.

Once we had met, there was no limit to Othmar and Jackie’s hospitality towards people about whom they knew nothing apart from the fact that we were touring cyclists who came to their town. Perhaps hospitality comes more naturally from one cyclist to another, but it was really Othmar’s innate kindness that meant he immediately offered hospitality to us, and only found out about us later. It was a memorable day.