Today was a crazy cycling day and not one we are going to repeat in a hurry! First things first though. Our first port of call was the central post office in Saigon to post a parcel home. The building itself is a tourist attraction.

With it’s impressive frontage and airy ceilings, it is probably the most impressive post offices I have ever sent a parcel from. It opened at 7am and, being early birds, we were there at 7.02. We had seen the sun rise over the river and battled the early morning motorbikes, of which there were thousands. We filled in forms in triplicate and eventually the parcel was sorted. We felt quite pleased as even the simplest tasks can be daunting when you have no idea what the system is and you cannot speak the language (luckily they were able to speak English).

owever the parcel posting meant that we only really set off at 7.45 when the rush hour was well into full swing. The route out of Saigon involved several bridge crossings so the only option was to take main roads to get across the rivers. Luckily, most of the time there was a separate motorbike lane – but even that was hairy enough. Main junctions were completely crazy – if you had to cross them. Motorbikes swarmed across in every direction (traffic lights not seeming to apply to them). You just picked someone to follow and hoped that everyone else would go round you (which they did). It seemed impossible that there weren’t crashes. I am sure there are occasionally but we did not see any. At times there was a 3 line highway for cars, buses and lorries and 3 motorbike lanes – with little old us tucked into the side! It went on for km after km but we just had to grit our teeth and keep going. We ducked out at about 35km for a cup of coffee to calm out nerves but our turn off onto what we thought might be a quiet road was onto the old Highway 1, and was only marginally less busy.At about 55km we were finally able to turn off onto a genuinely quite road. It was astounding as, within a few hundred meters, we were in another world. By 60km it was definitely rural and by 70km we were cycling along a gloriously quiet road through banana and pepper plantations. Pepper was laid out on the roadsides drying. 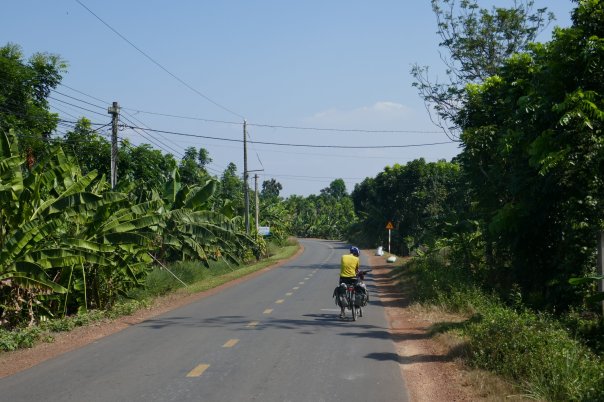 By 80km I was faint with hunger. At last a little place had signs for ‘Pho’ – the ubiquitous noodle soup. We in fact rejected the Pho as it was going to have an enormous pigs trotter in – which may be delicious to some but not what we fancied. So we pointed to a few things and had a simple but very welcome simple meal of beef, rice and a broth. We settled into small plastic chairs in the shade and filled ourselves up – splashing out as it cost 4,000 dong for us both (that is about 80p). For that we also managed to fill up our water bottles – so a bargain lunch.
We then realised that we had made a mistake on google maps. Although we had put in the destination town the route had stopped somewhere well short of that for reasons unknown and we had an extra 25km to do. We had plenty of time but we had been hoping for a short day after the emotional rigours of the morning, which was really quite draining even when safely through the other side. 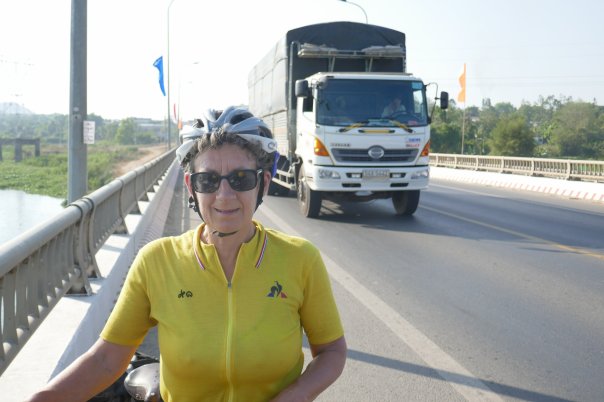 We soon had to leave our lovely quiet road back onto a busier road, namely R20. It was much busier than we were expecting. Loads of lorries and almost continuous ribbon development. The shoulder was wide so it did not feel unsafe but the perpetual noise and fumes were unpleasant. The road also started to significantly undulate – going higher with each ripple. We were soon higher than anywhere we had been in Cambodia.
At last we were into the last few km, but as often seems to happen we ended with the biggest climb of the day when we were most tired.
We found the only guest house that was marked on the app Maps.me (and it really did seem to be the only place in this quite sizable town). We were shown a very basic room with fan and its own little shower and toilet. It was clean and even though the bed was pretty lumpy we were happy with the price of 120,000 dong (4 pounds!).

The advantage of ‘basic’ accommodation is that there was no issue of us brewing up our reviving cup of tea in the back courtyard. Later we strolled into town which was already festooned with lights for the upcoming Chinese New Year (Tet) on 5th Feb. We at last found an ATM that gave us some money (2 earlier in the day had no money) and we ended up have Pizza – because there was a little Pizza place and we just fancied it after the long day. 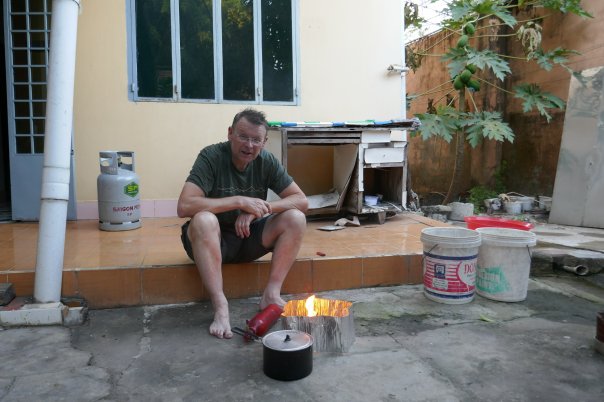 Tomorrow we head into the mountains but the 117 km we had covered was more than enough for today.