Today was a brilliant day for so many reasons. It was a day that illustrated the diversity and challenge of long distance cycle touring and delivered many of the benefits.

Our first challenge was getting the passports back. They were taken from us when we arrived at the guesthouse and all our efforts to get them back last night failed. The police kept them overnight. This seems a clear rule here but we were not asked for them in the hotel in Saigon/HCMC. However that “hotel” had its own peculiarities including the ability to hire a room for 2 hours, 4 hours or overnight, the red bulb in the room and the vast mirror on the wall to enable anyone in bed to seem themselves from multiple angles. The giveaway to show the normal use of the room was probably the basket of condoms next to the bed – but you had probably worked that out already! So obtaining passports and registering “guests” with the police is probably not highest on that hotel’s agenda (or that of the police as well). But outside the capital, the “system” seems to want to know precisely who is staying where – and photos are taken of passports and they are kept by the police overnight. Having explained we wanted to leave early (using the wonders of googletranslate), the guesthouse owner’s daughter appeared with the passports before 6.15am and we were on our way.

The first 12km were along the main DL 20 road – with lorries kicking out black fumes and countless people going the wrong way on the hard shoulder, forcing us into the traffic. It was OK but not the best fun. We had marked out a googlemaps walking route because the cycling option does not work outside Europe. This took us off on a minor road, which rapidly became a path and then an unmade up track. So we doubled back for a larger road but still off the DL20. This was perfect – a good surface and some traffic but not too busy. It wound its way across country towards the Nam Cat Tien national park. We got to the national park after 37km before 9am, but that was far too early to stop. The jungle walks here (to see a variety of animals – but often no animals at all) happen at dawn. So we could have either stopped and waited until the following day or pressed on. Pressing on felt best but not until we had had our first “iced coffee” which was unusual and remarkably refreshing.

The walking route took us along a narrow lane towards the DL 1275. It was paved for the first 100m, but a chap on a motorbike tried very hard to persuade us not to go down there with our bikes. We could soon see why as it became hard sand – just about possible to cycle but then a bit hairy. However that was nothing compared to the “ford” we had to cross next. As we looked at the ford a truck came along with pigs in the back. The truck ploughed through the fairly deep water and swung from side to side – with the pigs squealing their objections as this lorry nearly turned over altogether. Daunted but not totally put off, we removed our shoes and socks and walked the bikes across – bit by bit. The road on the other side was paved and within a few km we were on the main DL 1275 road.

We knew we had loads of climbing ahead but it took an age before it started. We broke for banana sandwiches for an early lunch and then found the pleasant town of Da Teh. There is clearly lots of money in this area – fertile land, lots of water and easy reach for major markets. So the cars and motorbikes seemed new, there were fashion shops for women’s clothes and (of course) endless mobile phone shops with a dazzling array of new phones for their customers. We stopped at one to swap Bernie’s Sim cards between phones and the women attendant was hugely efficient and refused to take any money for her work. Her male assistant spoke some English and gave us directions out of town (Garmin maps had failed at this point but now restored). It was clear that foreigners were unusual but very welcome.

After Da Teh the road went more or less straight and slightly up, but then (at about 70km for us) the climbing started in earnest. We had done one climb to the Kaio Hai national park in Thailand but it had all been pretty flat since then. This was a steady 500m climb at between 5% and 10%. Progress was slow but, as we climbed, so the views appeared. It was spectacular and beautiful but was also the heat of the day – about 38C. That would have been oppressive a few weeks ago but the humidity was OK and we are getting acclimatised. 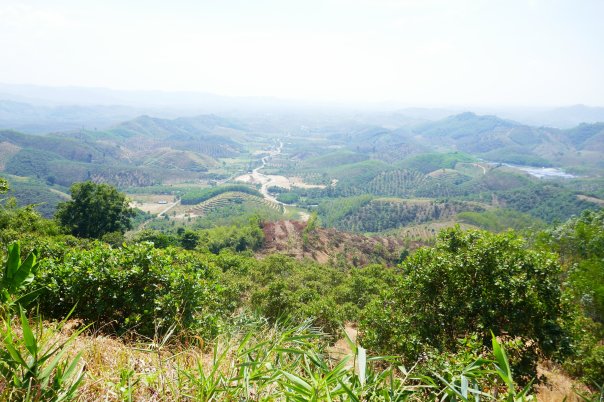 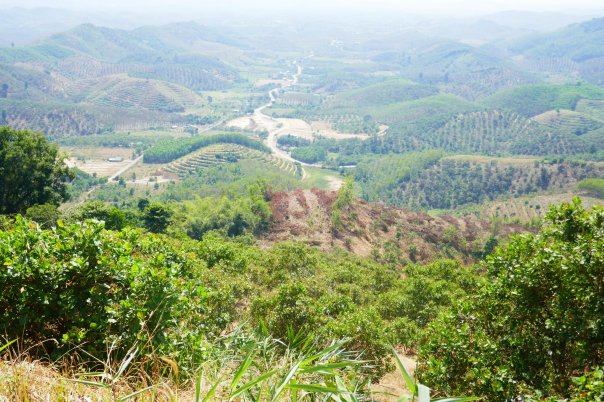 At about 400m we saw a stream and so filtered water to replenish the water bottles. A lorry stopped with some guys who clearly thought we were slightly mad filtering fresh mountain stream water – which they just drank from the stream. Eventually we topped out at about 600m and then had a series of 50m ups and downs for the next 25km. We were passed by lots of locals on motorbikes who gave us a variety of thumbs up – and by some tourists who were motor biking the road on their way north.

About 3.30pm we got to our destination, Loc Bao – a small town. By then we had done 108km and 1050m of climbing, and were pretty whacked. As we came into town there were a group of men eating an extended (and liquid) lunch who enthusiastically hailed us. We stopped and, via googletranslate, exchanged pleasantries and said where we had cycled from. They gave us coke to drink and offered us food, but we wanted to get sorted so we just accepted the drink. But they explained that we did not need to camp as there was a guesthouse 2km up the road. We said our thanks, took photos and then moved on. They were so, so enthusiastic to meet us – even though language is a major obstacle – and probably would have fed us and put us up for the night if we had wanted it. There was no end to their hospitality, even though, as an all male group, they did not quite know what to make of Bernie. She qualifies for hospitality because she is a foreigner!

The guest house was 2km away – as predicted – and within 10 minutes we had secured a room and were under hot showers – all for 7 pounds a night. All in all, a brilliant day.