Every trip we have one or two epic days. Today was one of them – with the highest amount of climbing in one day since starting our ‘Decade to Australia’ jaunt. It was a fantastic day…we are still functioning on the endorphins this evening.

We started with our usual early morning and were straight into a climb out of the valley – no warm up today.

Within a few km we were in incredible jungle scenery as the sun gradually rose above the hilltops. Bamboo and creepers and lush foliage, climbing steeply but just within what was bearable. We passed through a small cultivated flattish area with shimmering greens in the early light.

Up, up some more and we were into pine groves. Then we levelled out a bit along a ridge and suddenly before us opened out an amazing vista. A huge plateau with mountains in the distance. We took in the view as we ate bananas and recovered – we had done 450m climbing in the first 9km! Plateau it may have been but not a plain – there were still plenty of undulations. Some through pine groves with lots of bee hives. The day was warming up but we were now at 1000m so not too hot.

The kilometres ticked away a little faster and we got to a largish town. We passed a few nice looking coffee houses as we descended into the town but thought we would wait to get into the centre – a mistake as there were non there. We didn’t want to climb up the hill so got a little way out of town and tucked into boiled egg sandwiches under the shade of flowering coffee trees – eggs fresh from the hen yesterday (which we hard boiled and bread fresh this morning – delicious!).

The next section was through a large area of coffee plantations. The road more or less followed ridges but was still up and down.

Then a proper climb over a high ridge until we reached a little town at a road junction. Time for more food. At first we were told the nearest restaurant was 10km away in the wrong direction – but were then pointed to a small Pho (noodle soup) joint.

We had the most delicious beef noodle soup imaginable – not just because we had climbed 1200m and had been 6 hours in the saddle. The people were very friendly and after a good break we were ready to go again. We were further rested by then having a glorious 400m descent down to a river (erasing from our minds that we had to climb up the other side). Half way down we saw another cyclist making her way up. Megan was Canadian and had cycled from Hanoi – pretty much the reverse of what we were planning. She gave us some really useful information then we were wishing each other well and on our way again.

Down to the river and over the bridge – then into another 400m climb up the opposite ridge. The gradient wasn’t too bad and we were very much in plodding mode as we inched our way up to the next plateau. We stopped at a cafe for a drink and rest and a 16 year old boy came to chat and practice his English – which was pretty impressive. His school was opposite and he was clearly very proud of it. His 2 elder sisters were both studying in Ho Chi Minh City and he wants to be a professional goalkeeper. We did not have the heart to tell him that, at about 5′ at aged 16, he may lack some of the essential physical attributes – namely another foot of height. However with his social and language skills we were sure other opportunities will open up for him. 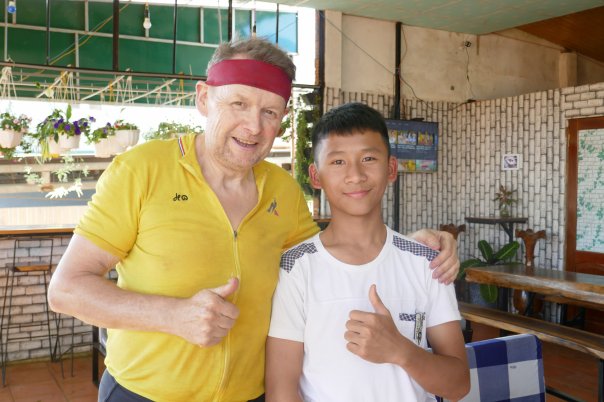 Into the final section – the last 20km. Nothing is flat so there were still undulations all the way – none severe but legs were definitely tiring. We crossed the threshold of our previous highest amount of climbing in 1 day and still had 15km to go. Head down and keep going. In the final 10km the road surface deteriorated just to make it a bit more trying then at last into the final 150m descent into Dinh Van – a pleasant thriving town with a small central square around a lake. We found a guest house on the square and finally collapsed!
We revived enough to go out and eat and had one of our best meals just to cap the day – enormous tiger prawns on skewers and seafood noodles.

Two Tiger beers finished the day of nicely. I doubt we could have done this ride 4 weeks ago but it is amazing how fitness improves. We are stronger, have more stamina and weigh less than 4 weeks ago – as well as having dark bits on our bodies which don’t wash off in the shower (but there are always parts that do!). However, more importantly, we know far more about the countries that we have passed through, have met some fantastic people every day and are thoroughly looking forward to the second half of our trip.